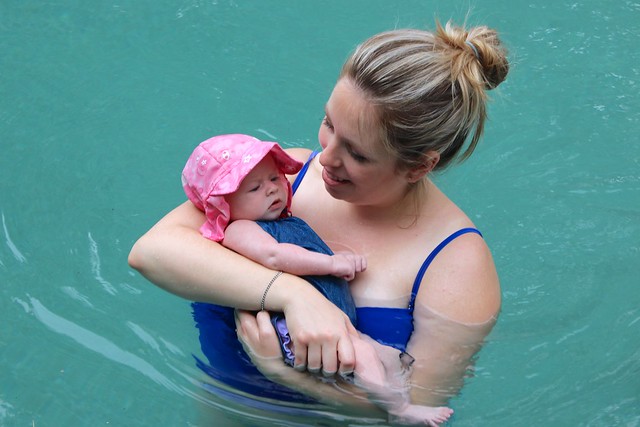 When Lucy was born in May, I was a little worried that it would be a summer spent indoors with a newborn. Little did I know I’d have one of the best summers of my life. We have the sweetest baby who loves to be out doing things. The best days are the ones spent in the pool, out in the boat, at the drive-in movies, yoga in the park, visiting new places, walking the dogs or selling flowers at the farmers market.

It’s the days that I’ve tried to stay home and tidy things up that she has been most fussy. I had a bunch of things to do around the house this week and pretty much none of it got done (including blogging!) because she was so inconsolable at home. I’m starting to think that maybe she is teething early too. I’m writing this blog post at my kitchen counter with Lucy napping in her carrier while I bounce around the kitchen. It’s the only way I could get her to nap today and have my hands free to get some things done! 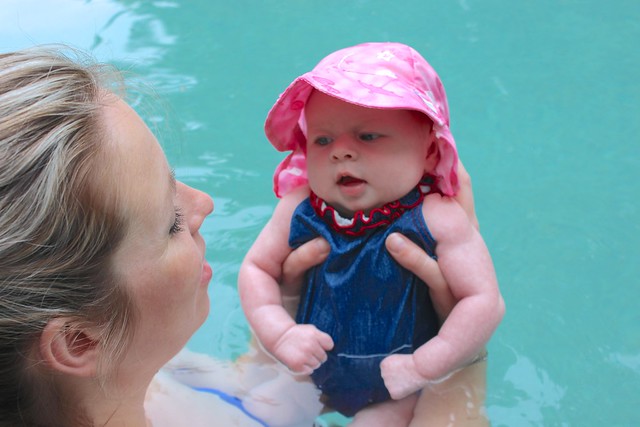 This was back when she was only three weeks old and one of the first times she was in the pool. Now she’s three and a half months and already a good little swimmer. She kicks her feet, splashes with her hands and went underwater for the first time the other night. 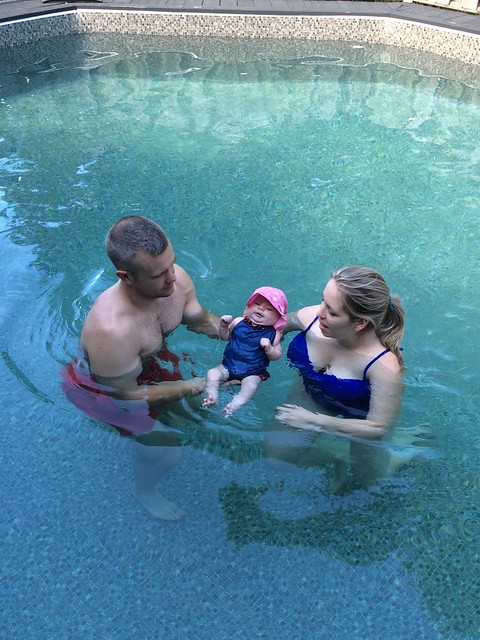 I’ve always been a swimmer and used to teach swimming lessons and lifeguard when I was a teenager, so it’s been really special getting to teach her as well. My parents’ pool is still warm, but I’ve signed her up for swimming later this fall to keep her comfortable with water. 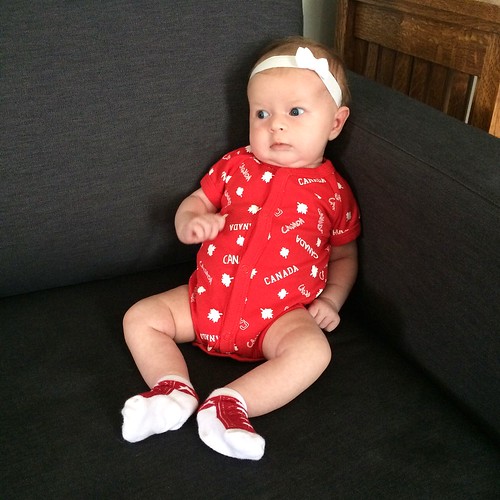 We celebrated her first holiday in July – Canada Day! When I see pictures like this I realize how much she has changed already. 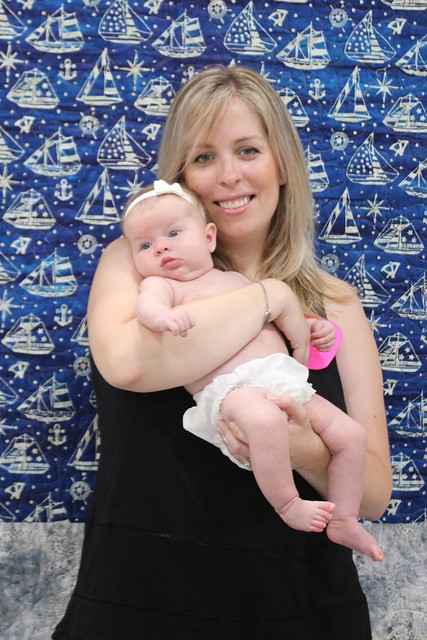 Our local fall fair had a baby contest last month. I was in the same contest 31 years ago (and didn’t win, ha!) but Garrett won the one in his town when he was little. Our little butterball was more interested in the other babies than the judges, but we still had a great time. 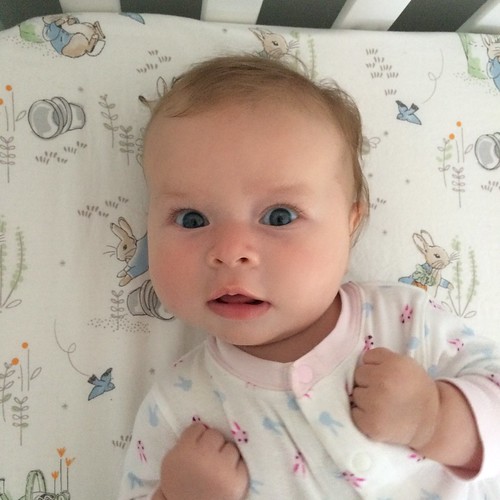 Most mornings we hang out at home in the nursery. Lucy is still sleeping in a bassinet in our room, but I’m trying to get her more comfortable with her own crib. She loves to talk to her bunny mobile while I put away laundry or make our bed. 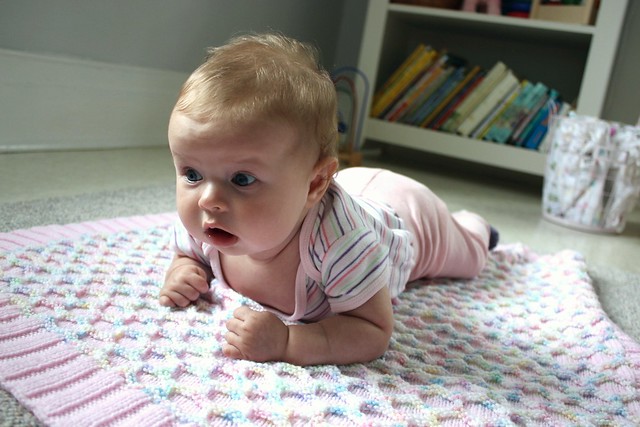 Then it’s tummy time followed by a couple of books. Alligator Baby by Robert Munsch if her favourite right now. She tries to talk over me as I read it. It’s so cute. 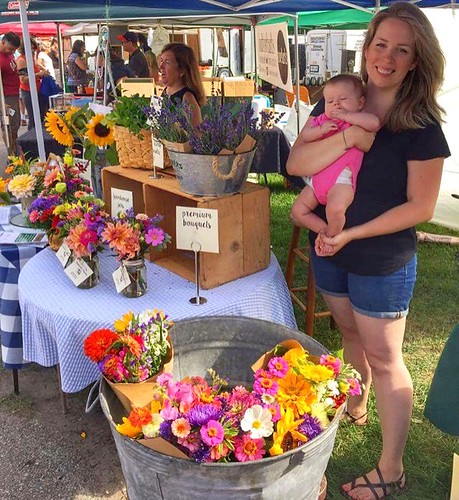 On the weekends we’ve been working with my mom doing Cloverhill Flowers for the farmers market. 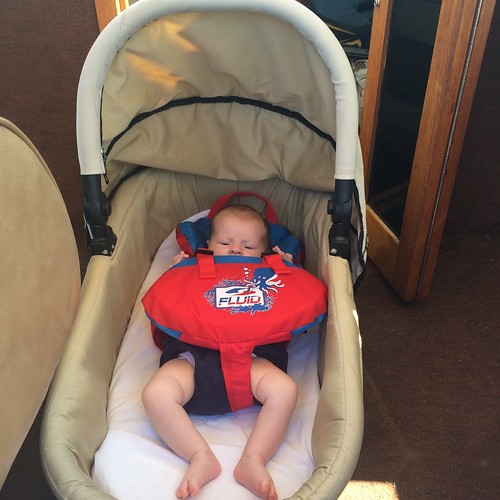 At the beginning of the summer, Lucy would hang out in this little cot in my parents’ old boat for a little jaunt around the lake. 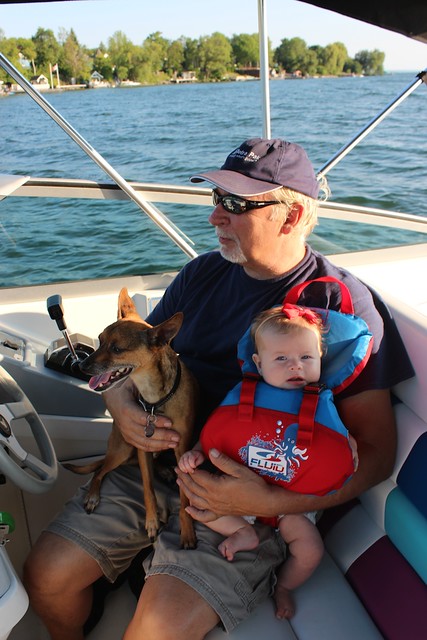 Only a couple of months later she is up in the captain’s seat with grandpa as his first mate! My parents got a newer boat this year and it’s been great to have the space for her to sit up with everyone. 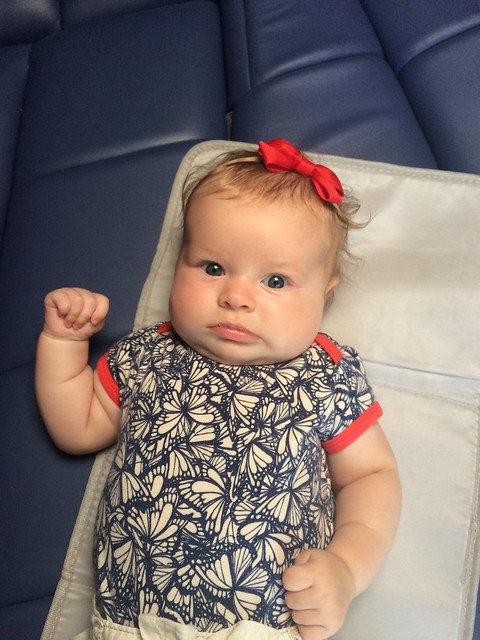 They also have a nice cabin down below for diaper changes, nursing and the occasional nap (which I’m always happy to oblige!) 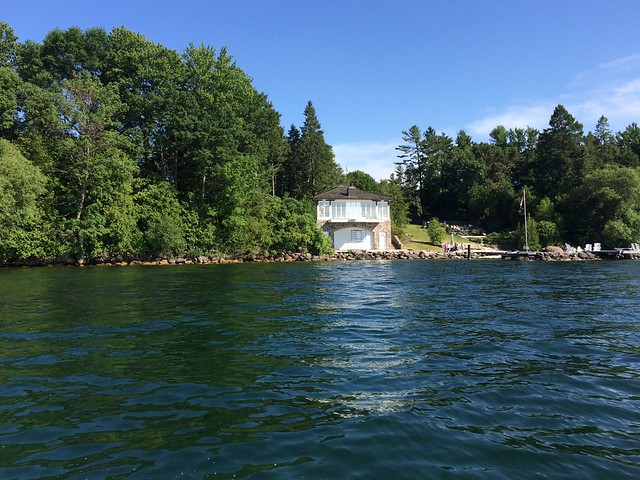 When I was a little baby, my parents used to take me around this very same lake trying to get me to fall asleep. 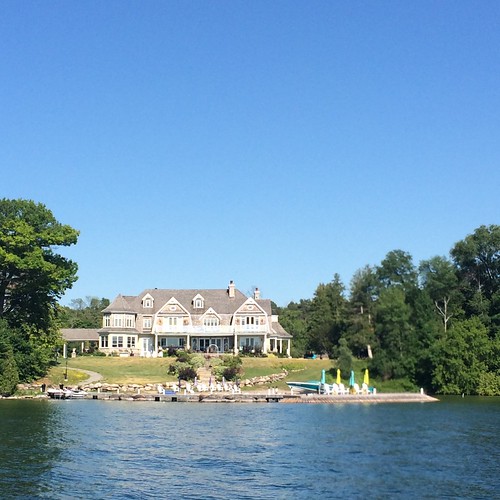 I swear they conditioned me to sleep in boats and the only way I’m able to stay awake now is  by looking at the beautiful houses along the water. 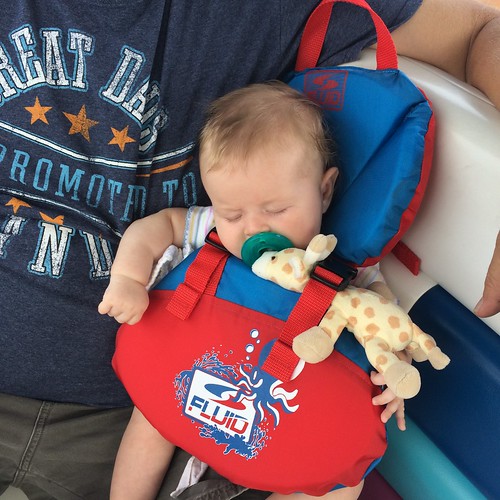 She loves her Wubbanub soother (best invention ever), and we found a handy way to keep it in reach for her in the lifejacket, ha! 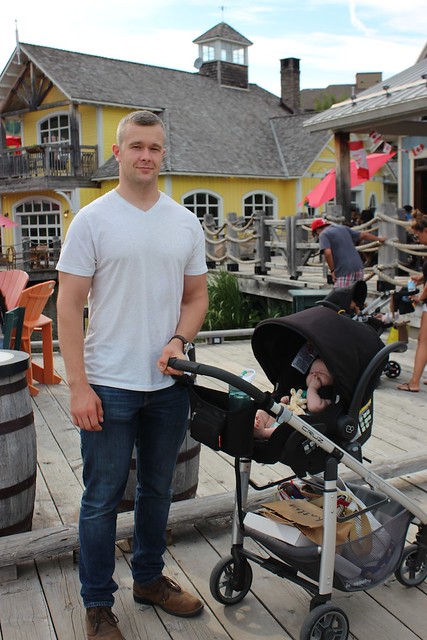 She is such a good baby on the move that we’ve been able to go to visit lots of small towns in Ontario – Dundalk, Badjeros, Creemore, St. Jacobs, Collingwood. 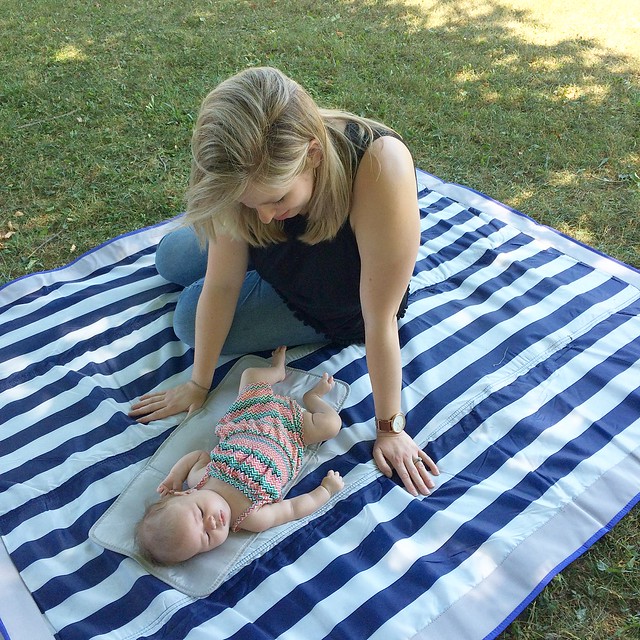 We’ve stopped to visit little shops and have picnic lunches – and she’s been a real happy traveler! 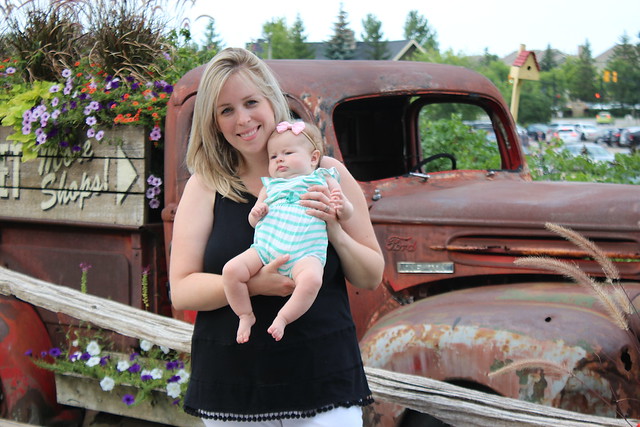 We’ve planned our first family trip later this fall, so I hope this keeps up! 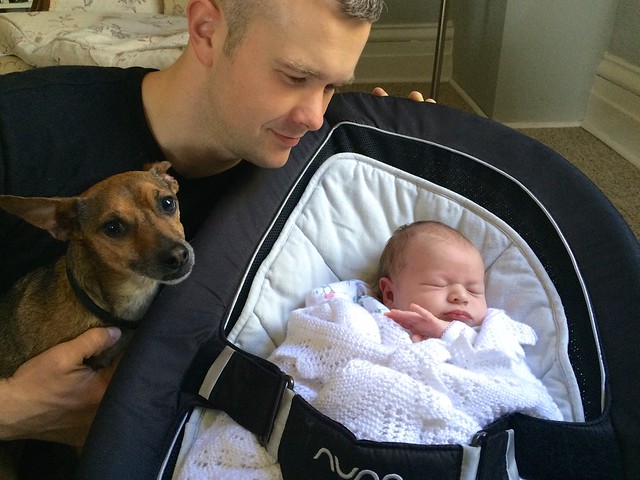 A big question I get all the time, is how has she been with the dogs. When we first brought her home, Whiskey and Cola were both so curious what this squirmy little noisemaker was, but it didn’t take long for them to get used to her. 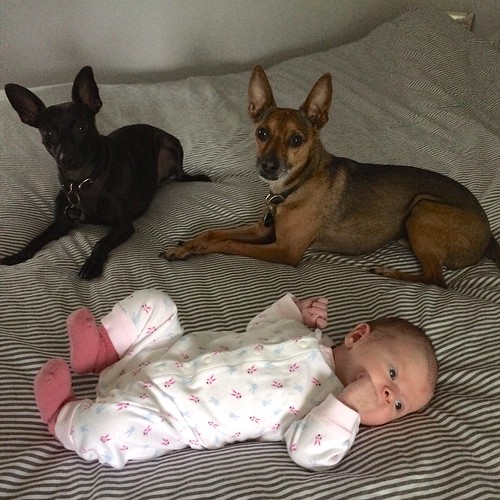 They always have to be with us, whatever we’re doing. Whiskey gets up with my for every late night feeding and diaper change, while Cola is more interested in convincing me to throw the ball for him if I’m playing with her on the floor. A few times he’s tried to get her to throw it as well – not quite there yet, buddy! 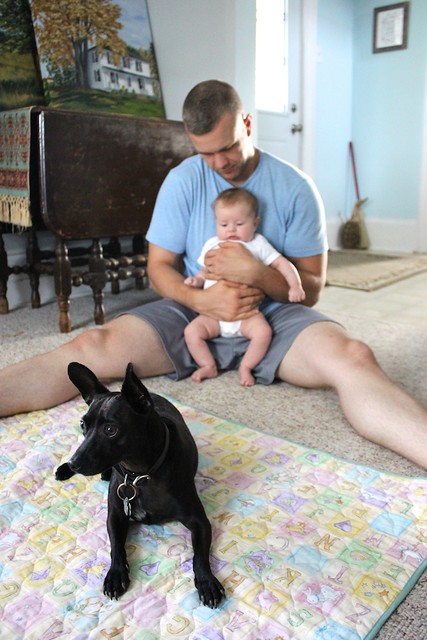 On the flip side…she is definitely interested in what they’re doing. When they walk by her, she follows them. And when Cola comes running at her with a ball, she is all giggles. She recently started using her Jolly Jumper and bounces around to follow them. They’re in for lots of fun when she starts moving! 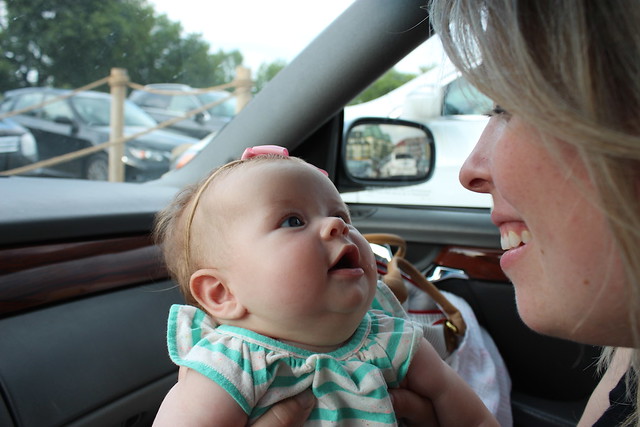 Before Lucy was born so many people told us to be in the moment and enjoy this precious time with her, and we’ve really taken it to heart. She grows leaps and bounds every week and I want to be able to look back on these times and know we savoured them as much as we could. 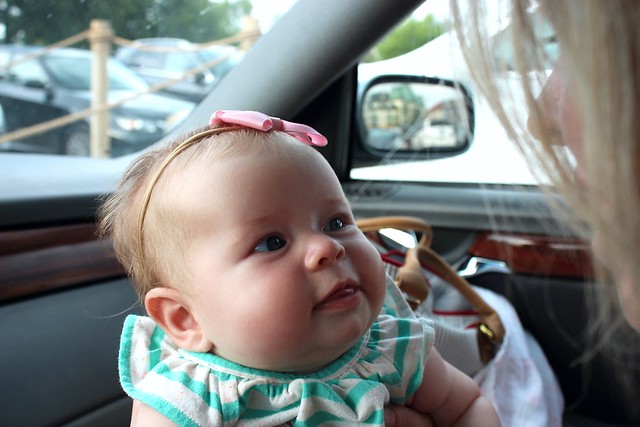 Motherhood definitely comes with it’s highs and lows, but seeing that sweet little face every day makes it all worth it. 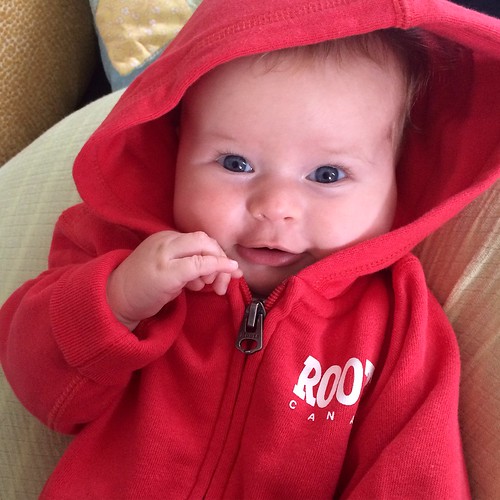 If summer has been this fun, I can’t wait to see what autumn adventures we find with this little snugglebug too! xoxo