Garrett had to work all weekend, so I loaded up the dogs and the laundry and headed up to my parents’ house for the long weekend. I drove up on Friday night in time for cocktail hour, followed by steaks, salad and fresh corn-on-the-cob out on the back porch. 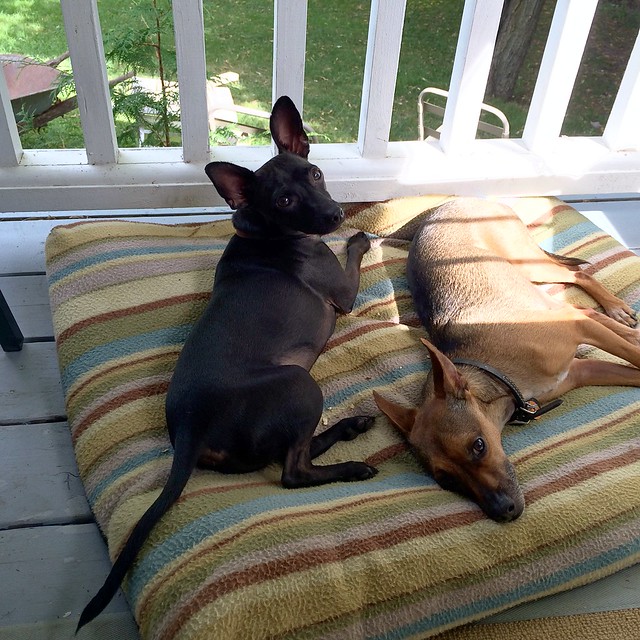 The dogs were happy to join me for the weekend. They divided their time between running around and napping in sunbeams on the porch. These two have such a tough life.

On a whim, my mom and I headed out to some garage sales around town and picked up a couple of things – a sturdy card table for our extended family dinners and a heavy duty pot that we hope holds up to the abuse of my brother’s university roommates. They go through pots like crazy! 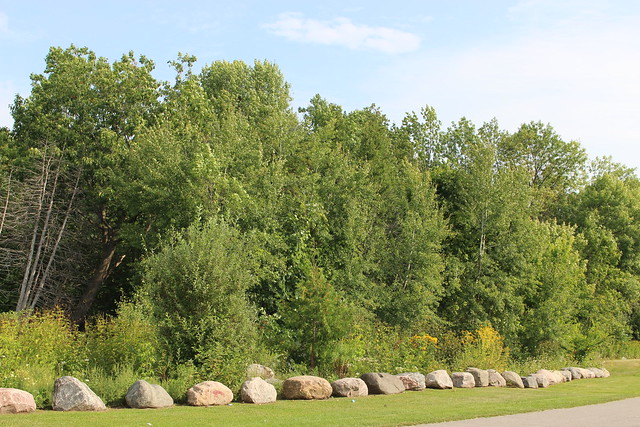 While we were out we picked up coffee/peppermint tea, grabbed all the necessary groceries to make my Italian Turkey Meatballs for dinner and drove over to this park area that my mom helped the local high school naturalize. A couple of years ago they planted a variety of plants to promote butterflies and bees, as well as filter drainage from the park as it makes its way through the watershed to the river. 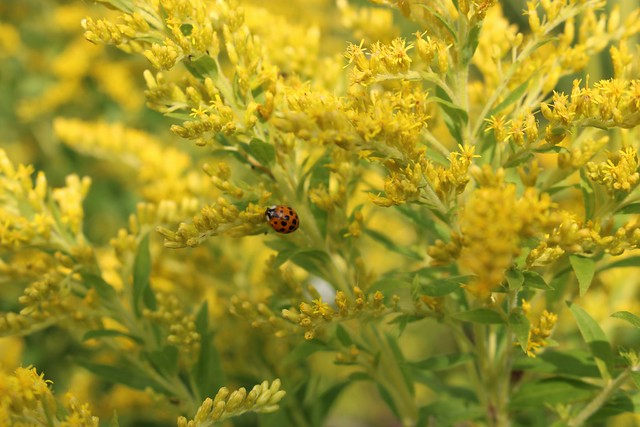 It was great to see what a beautiful space they had created and all the wildlife that was flourishing there. We saw ladybugs, butterflies and bees everywhere! 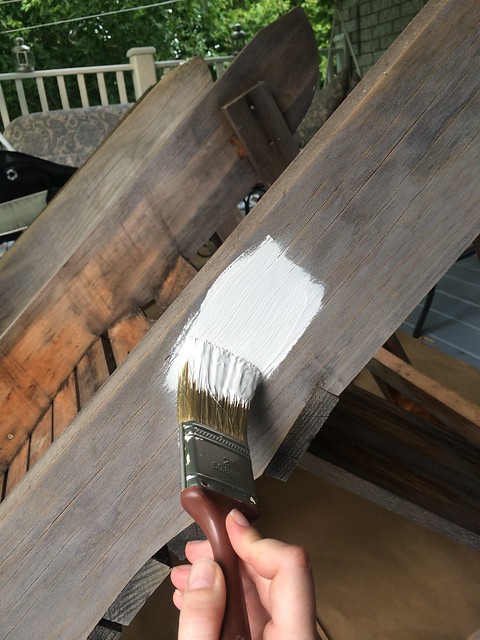 Back at the house, I switched into paint clothes and got started on my latest DIY project, which I’ll be sharing next week. There is nothing quite like seeing a piece start to transform when you add on paint. 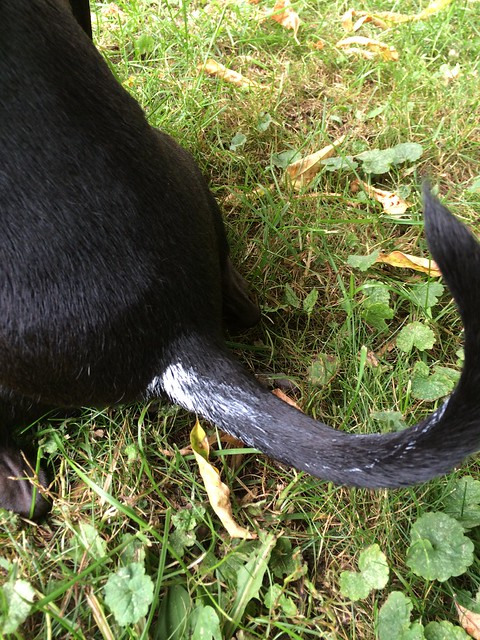 I went inside to get a drink and came back out to find that someone had gotten a little too close to the paint. Then I realized that Cola’s rope didn’t go that far, so how did he get hit? Yes, my prankster brother was at it again, this time while trying to make Cola into a skunk. Thankfully it washed off easily. 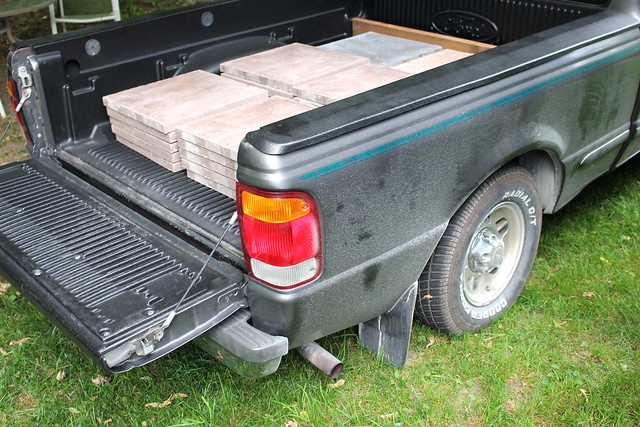 While I as painting away, my dad and brother were busy making a patio platform for our new addition to the backyard….a real hot tub! My parents have used their inflatable one the last couple of years, but when they dug it out of storage this month they found that a family of mice had chewed it up to make a home.

It was time for an upgrade and luckily they found one for a steal. It’ll be a few weeks until they have it, but of course the guys couldn’t resist getting the base made. I think my brother just wanted to drive his truck through the backyard. It was a little weighed down, as you can see from the mudflaps stuck in the grass, ha! (and it needs a car wash)

We took a little break from yard work to have some dinner, including more delicious corn picked up from a farm nearby. (We ate a lot of corn this weekend in anticipation of not seeing it for another 10 months). 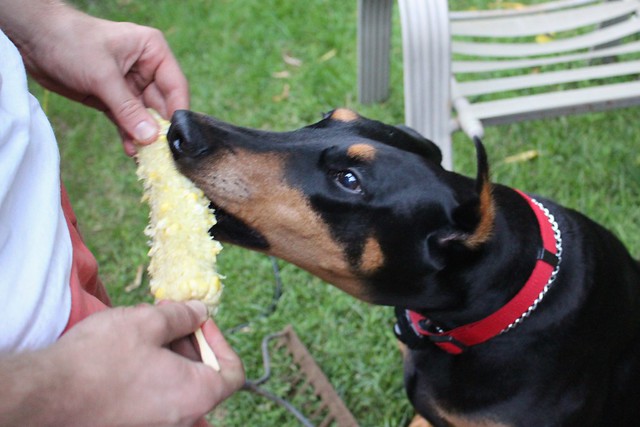 Then my brother showed me Shadow’s new trick. She likes to nibble to leftover corn on the cob oh so carefully with her teeth. It was so cute. 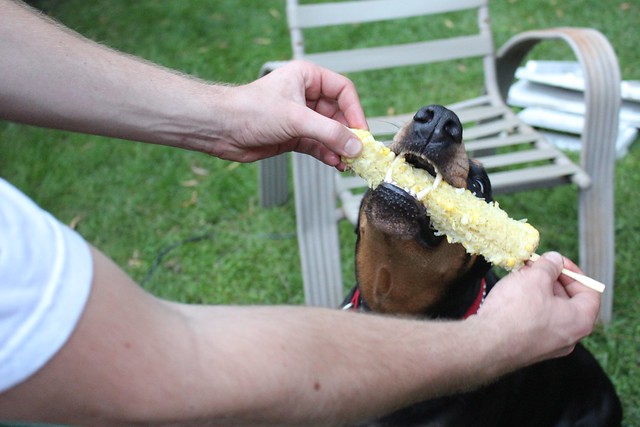 Earlier that day my mom heard a weird crunching noise from the living room and found Shadow with a fresh peach between her paws – that she had stolen from the basket on the kitchen counter. Dogs aren’t supposed to eat stone fruit, but I guess no one told Shadow that. She sure does love her seasonal produce. 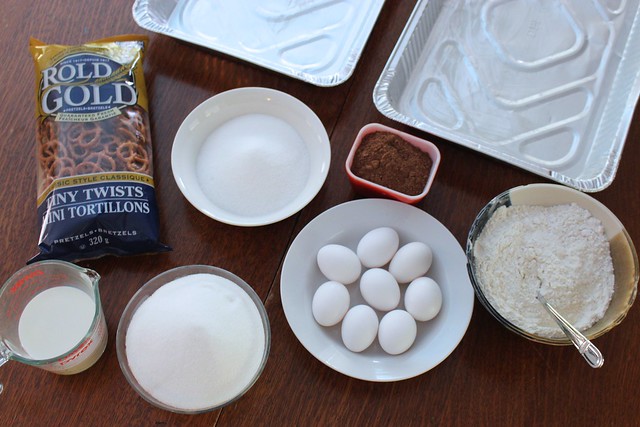 On Sunday we got up and starting working on the outdoor projects again, with a little baking break after lunch. We were heading over to my aunt and uncle’s place for their annual corn roast, and my mom wanted to make something fun to take with us. While I painted, she sat out back looking up recipes on Pinterest and we started putting together some ideas. 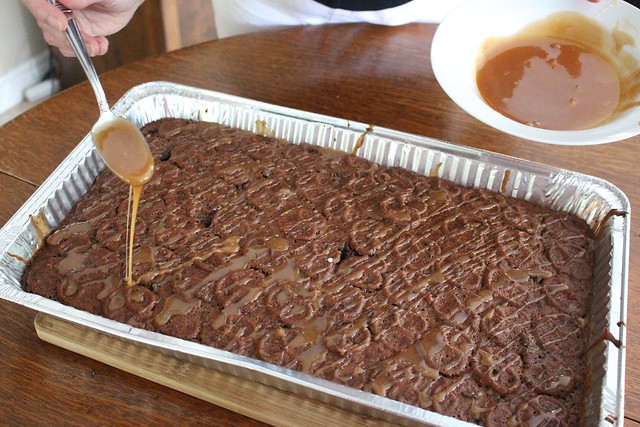 We came up with a new recipe for a massive batch of salted caramel pretzel brownies with a delicious homemade caramel drizzle. Oh man they looked so good…but then we tried them at the corn roast and it was a bit disappointing. Thankfully people still seemed to like them and the whole pan was gone quickly, but I still want to fix it.

Instead of a chewy dense brownie like we were hoping for, we got a drier cake like texture. Boo.  I’m still convinced that we can figure this out – it’s just going to call for more test batches to perfect the recipe. I think I’m willing to take one for the team on this one. 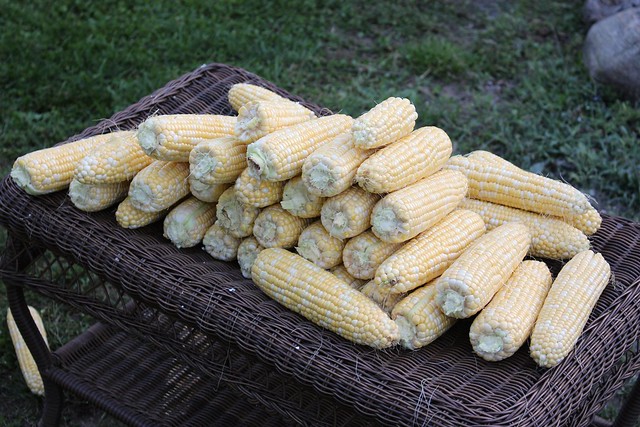 We cleaned up the yard work and cleaned up ourselves (I’m the queen of paint splatter on myself), my dad, mom, brother and I hopped in the car and drove along the lake to my aunt and uncle’s place for the corn roast. It is an annual thing that I look forward to all summer and thankfully the weather was perfect for it this year. Sometimes it can be quite chilly out by the lake.

They serve up delicious roast beef from the local butcher, with big dinner buns, lots of corn and plenty of potluck side dishes and desserts. It’s a big feast! It’s also a great chance to catch up with family and friends, before many of them head back home for school and work. 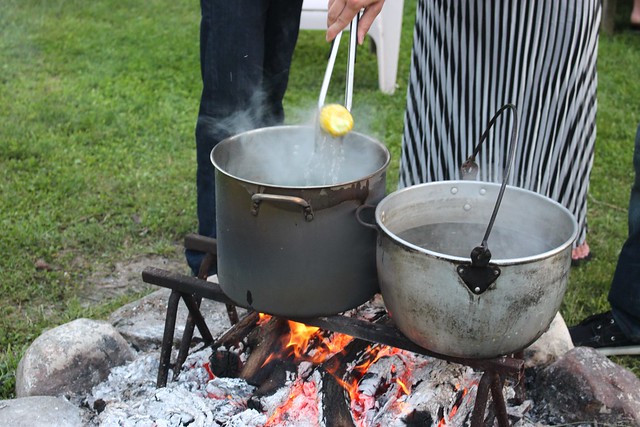 This year was the biggest turn out that I’ve ever seen, with almost 130 people dropping by. They went through something like 100 cobs of corn. 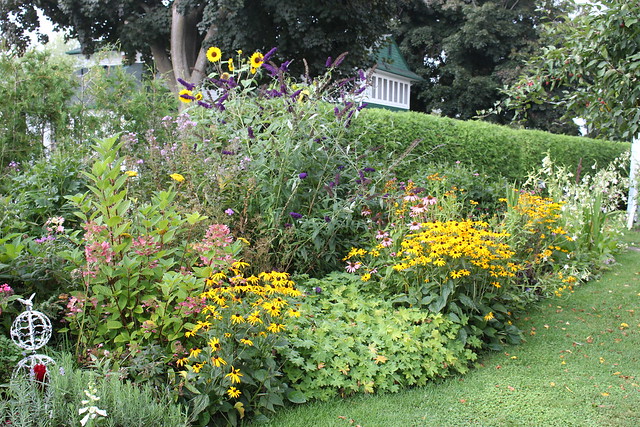 While I was there, I popped over to our family friend’s house to check out her incredible gardens. They are always full to the brim with beautiful flowers. 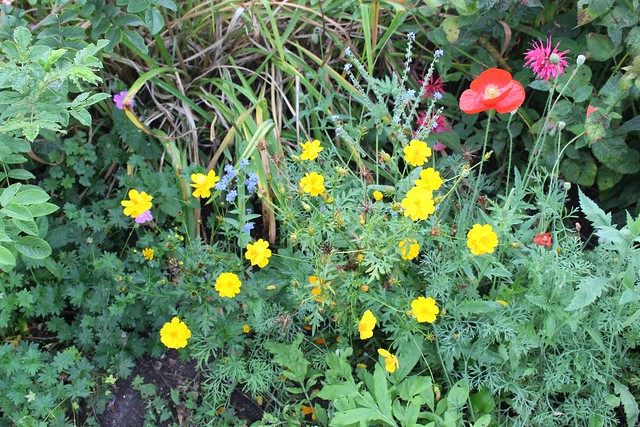 I was so excited when she showed us some of the wildflowers that she grew from the DIY Honey Bee Wildflower Seed Packets we gave out at the wedding. There were blues, pink and yellow blooms, and that big red poppy too. 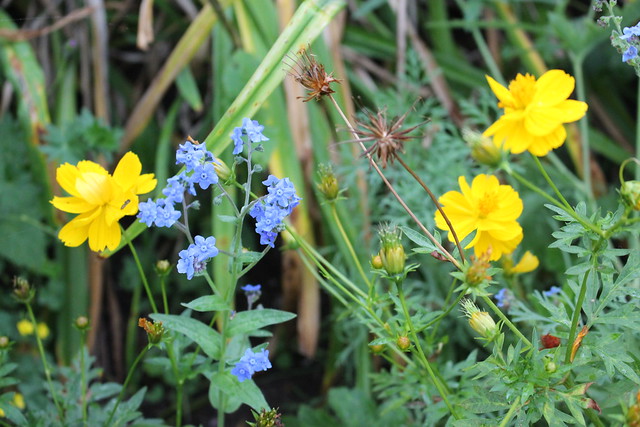 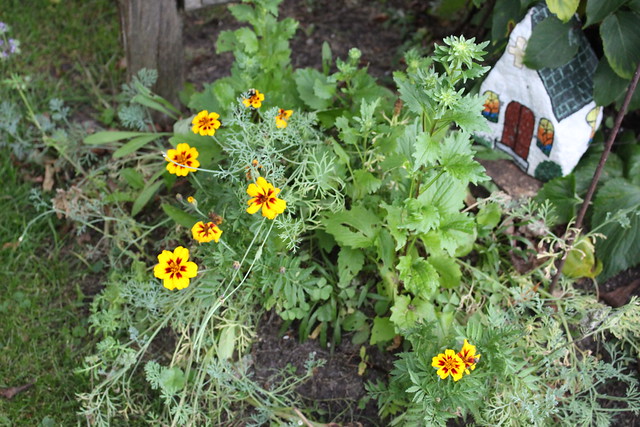 Another patch turned out to have these marigold too and I saw a honeybee near them! 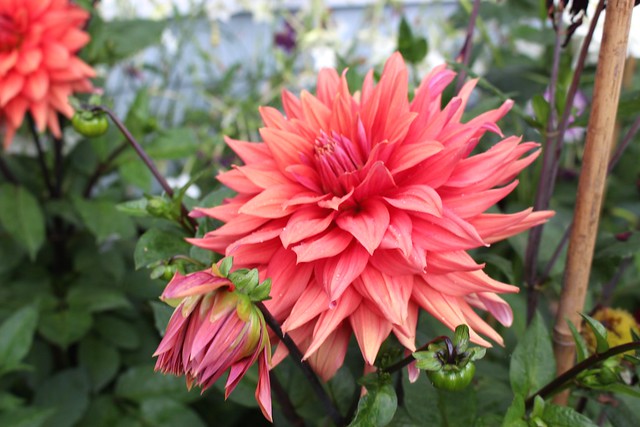 On the way out of her garden, I came across these giant dahlias that were as big as dinner plates. 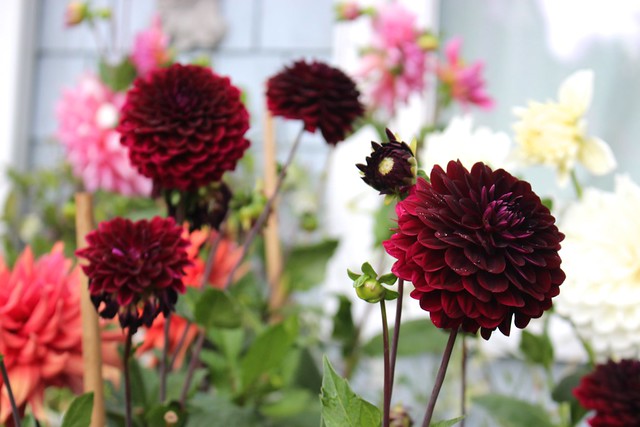 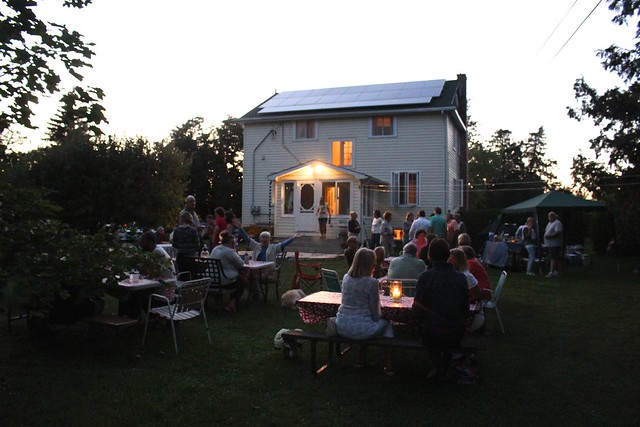 They rest of the night was full of campfire songs, an impromptu egg toss and lots of good laughs. It was a great way to wrap up the summer. 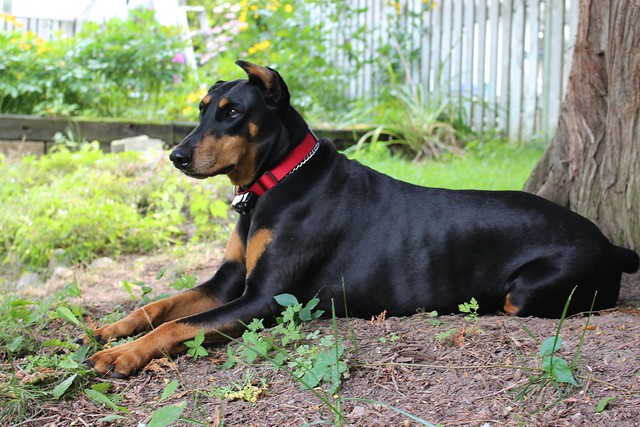 Monday we were all back outside. With the prospect of cold weather on the way, I was so glad to be outdoors as much as possible this weekend. Even when I was working on my laptop (ok, I was really just doing some online shopping…yay for fall sweaters!), I did it all on the back porch. It was just too nice to stay indoors! 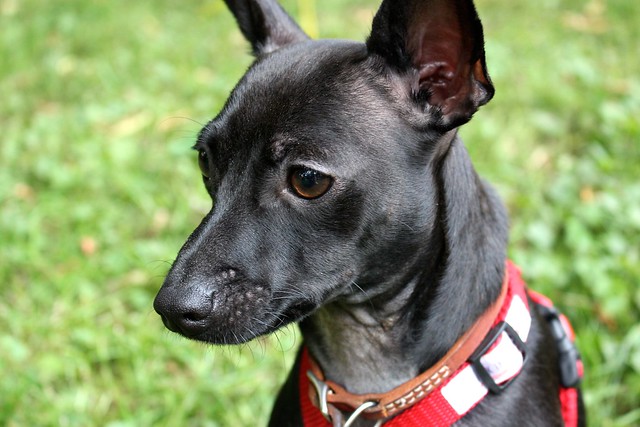 Cola was happy to be outside chasing anything that moves. His specialty is running after blowing leaves. I can’t wait to see what he is like when the leaves start really coming down in the next few weeks.

I don’t know if you can see, but he has been losing his hair all summer, and now I’m getting worried about how he’s going to keep warm all winter. He had lovely thick black hair and a little white patch on his chest when we first got him. Now he’s going bald on his chest and even the hair on his head is thinning! The vet thinks it could just be seasonal changes or hormones or even an allergy, or we could just have a hairless dog on our hands. I don’t think they make Rogaine for dogs, so I better get sewing him a sweater soon…and maybe a hat? 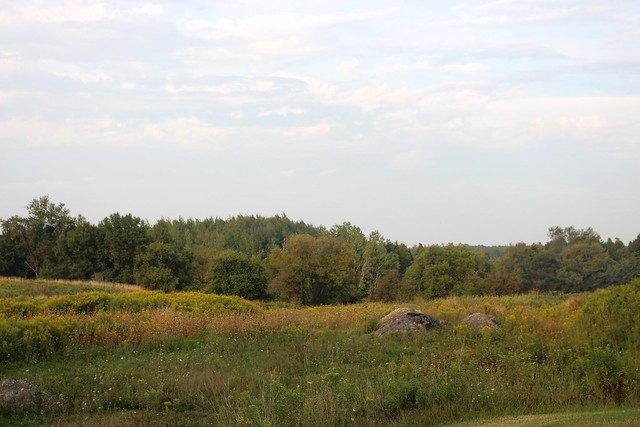 Earlier, I woke up to a message from our friends’ Dave and Courtney inviting me, Garrett and the dogs out to their family property for a walk through the woods followed by a bonfire with pizza. 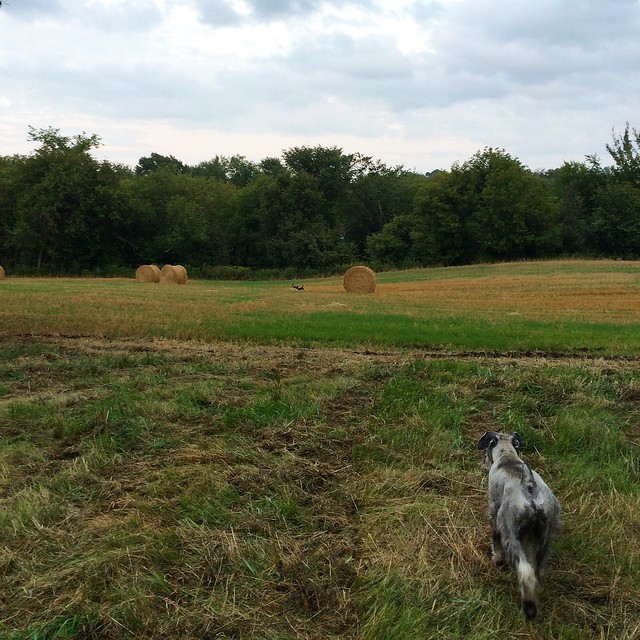 One of my favourite things about coming out here is that we can let the dogs go off leash and they have tons of land to run around like crazy…although I do feel like I’m calling them back to me every three minutes because they starting getting too far away. Next time I need to remember to bring little treats with me to lure them back! Thankfully the nearby fields had already been harvested, so we could see the dogs when they ran off into the distance chasing birds and squirrels. They were in heaven. 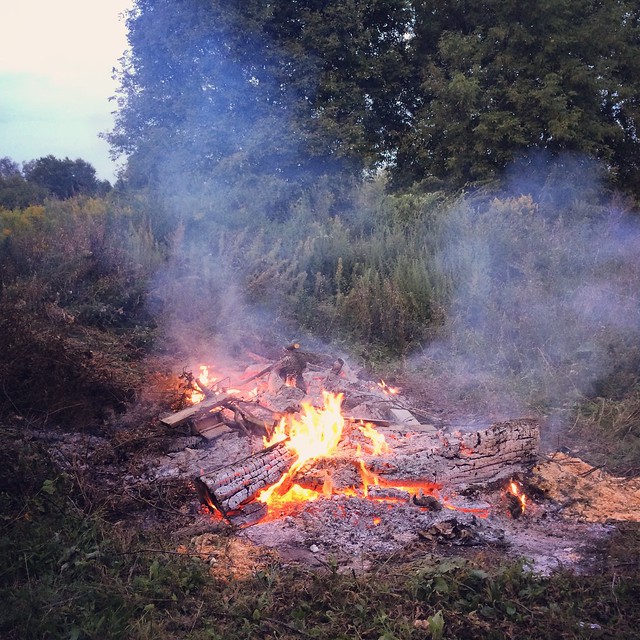 It was a great way to end the long weekend and nice to catch up with friends before heading into a busy month. Lots of fun stuff going on in September!

I’m happy to report that Whiskey and Cola were exhausted last night and have barely moved today. I feel just about the same way – signs of a pretty great long weekend. I hope you have a good one too!