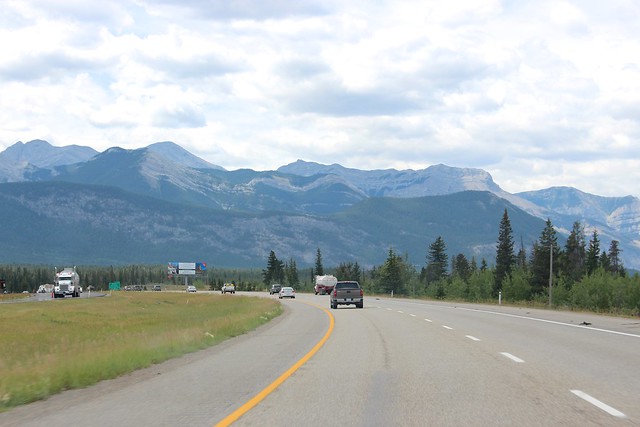 On our first morning in Alberta, we packed up the car and headed to the Rocky Mountains.  Even from an hour away they looked so grand! 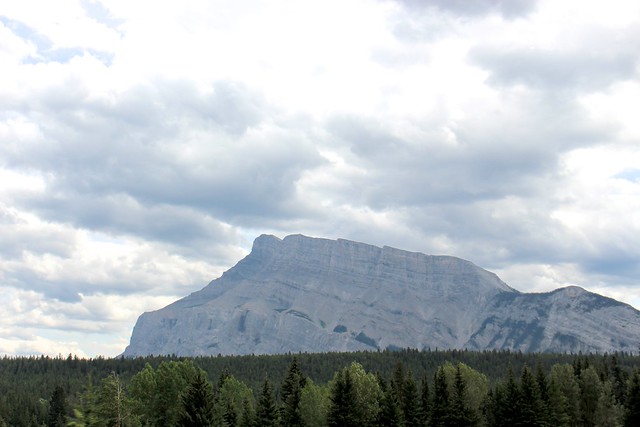 As we got closer and closer, I could hardly fathom anything being that steep. I’ve been to the mountains in the Eastern US and even to the Rockies in Colorado to visit family, but these ones looked so different. It was July and you could see snow caps everywhere. We stopped for lunch in the cute town of Canmore for delicious soup and sandwiches at Harvest Cafe. 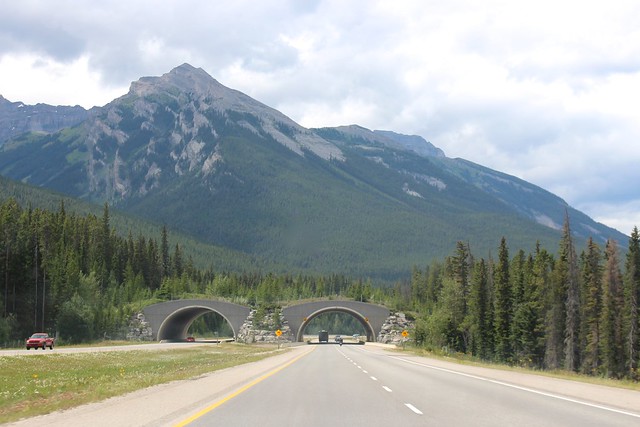 Back on the road, we continued on through the mountains and spotted quite a few of these animal crossings above the roads. The Banff area is home to a variety of wildlife, and overpasses and underground tunnels help them safely cross the busy highways. 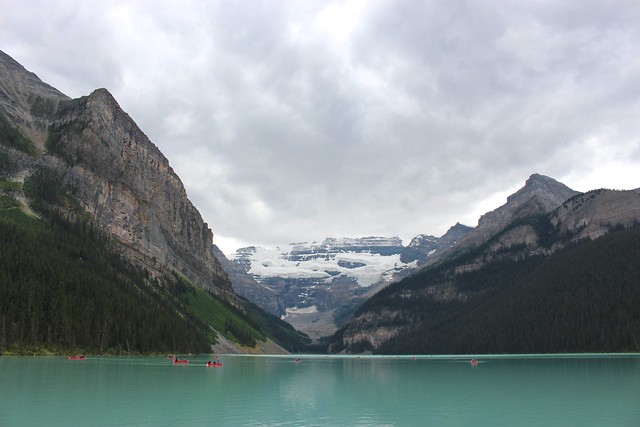 In no time we’d reached majestic Lake Louise, named after Princess Louise Caroline Alberta. It’s no wonder that this area is named one of the UNESCO World Heritage Sites. 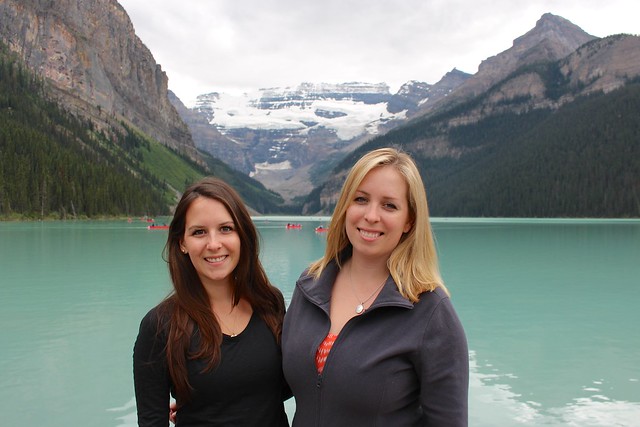 I’m so glad that I got to experience this with my sister. Our schedules rarely align where we get to go on trips together and having that time to explore a whole new place together was awesome. 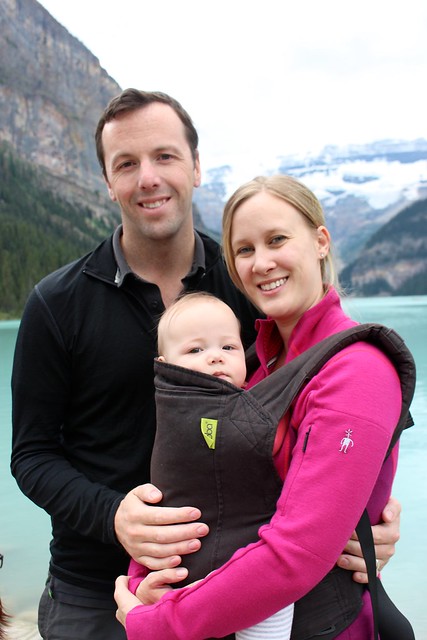 Dave, Alison and their sweet daughter – who probably smiled the second after we took this. She’s such a happy baby!. They were such great hosts for taking us all over to experience as much of Western Canada as we could possibly pack into five days. They’ve lived out there for three years and I was so thankful that things lined up and we were finally able to go out and visit them. The good news is that they’re moving back to Ontario soon for more adventures together! 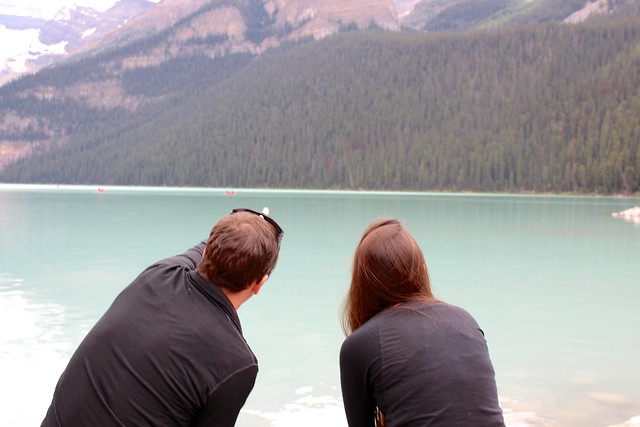 It was great getting to experience this part of the country with them. They were able to point out things that we would have had no idea about if we’d just shown up as tourists. Dave grew up on the other side on the Rocky Mountains in British Columbia and after years of hearing him talk about it, it was great to see it all in person. 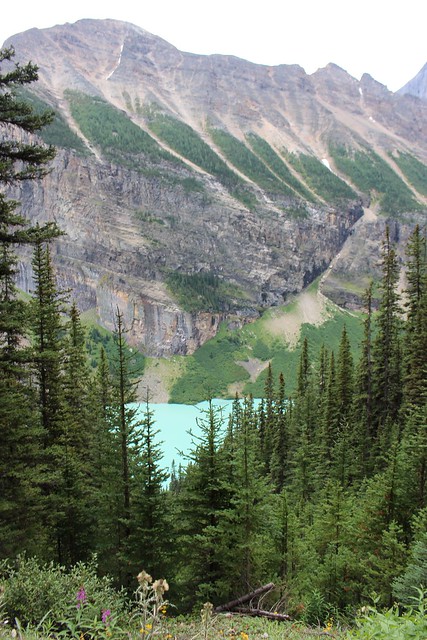 I’ve always liked hiking, but when you live in Ontario, it’s never terribly steep. We set out on the Lake Agnes trail for 3.5 km up the mountainside. The beginning was the hardest part and it wasn’t long before we were up high and looking out over views like this. 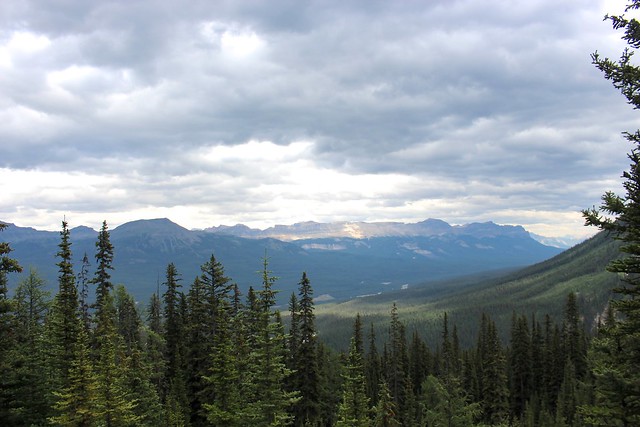 I’ll admit that my lungs were burning, while I watched little old lady tourists making their way up with walking sticks like it’s no big deal. I like to think of myself as a fairly active person and I don’t know if it was the air up there or not being used to inclines like that, but it was tougher than I expected…but still totally fun and 100% worth doing. In fact, I’d do it again tomorrow if I could. 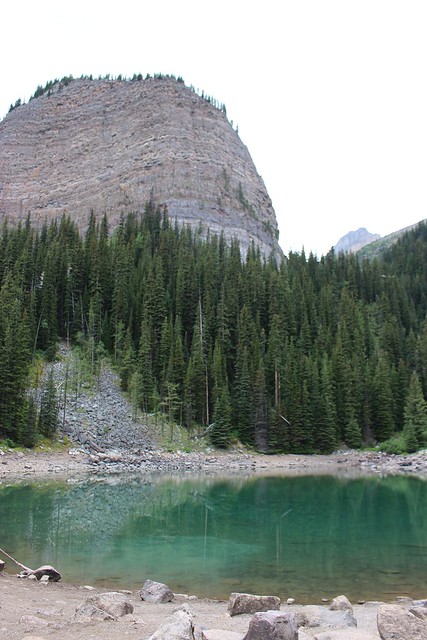 We knew we were more than halfway there when we reached Mirror Lake. Do you know why glacier water is always this beautiful blue-green colour? Part of it’s to do with physics and how water absorbs certain wavelengths to produce a blue colour…and the other part is something called “rock flour”. These little particles suspended in the water reflect even more of this blue-green light into our eyes so that we see the water as this amazing turquoise colour. The reason that you see this in the Rockies and not in the Alps or the Himalayans is because there is limestone in these particles, which has more reflective properties than other types of rock particles. Cool, huh? 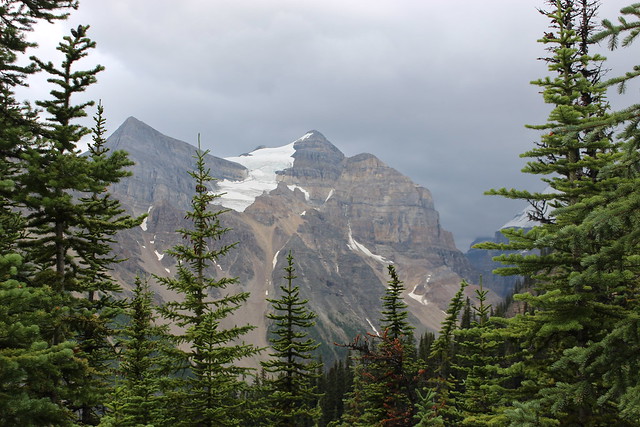 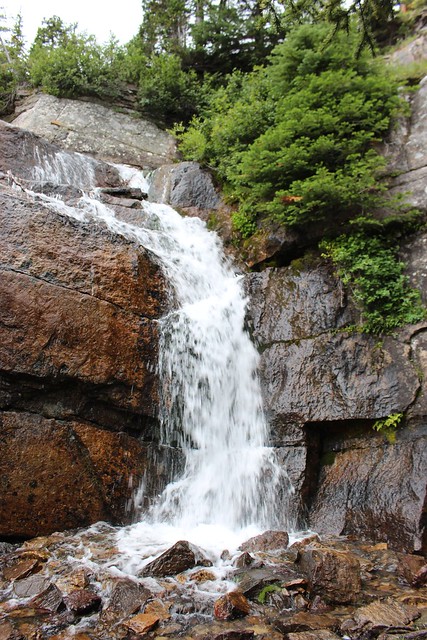 We came across beautiful cold water pouring down waterfalls on the mountainside. 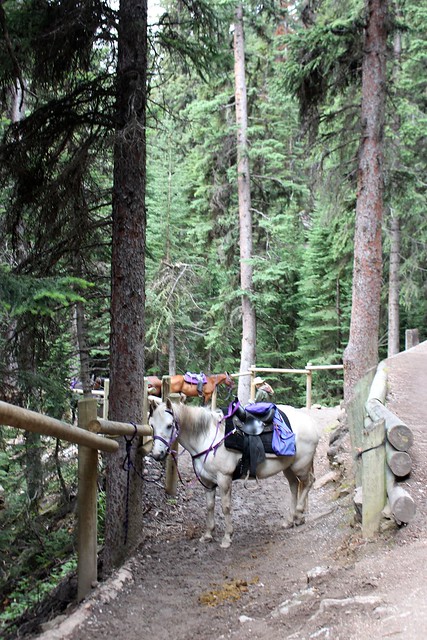 At this point of the hike my legs were rubbery, but heart was pounding and I couldn’t help thinking, “No one said we could take horses up instead?!?!”, ha! 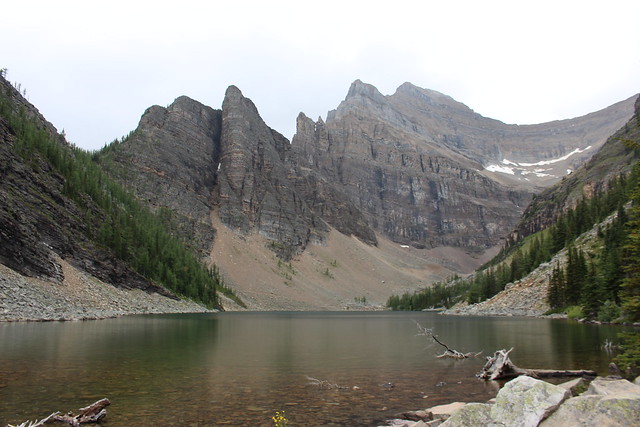 At the top of the trail we reached Lake Agnes, named after Lady Agnes MacDonald, the the wife of Canada’s first Prime Minister, Sir. John A. MacDonald. She visited the lake in 1886 and fell in love with the area. The altitude here is 2,135 m or 7,005 ft. Together with Mirror Lake and Lake Louise, these lakes are often referred to as the ‘Lakes in the Clouds’ 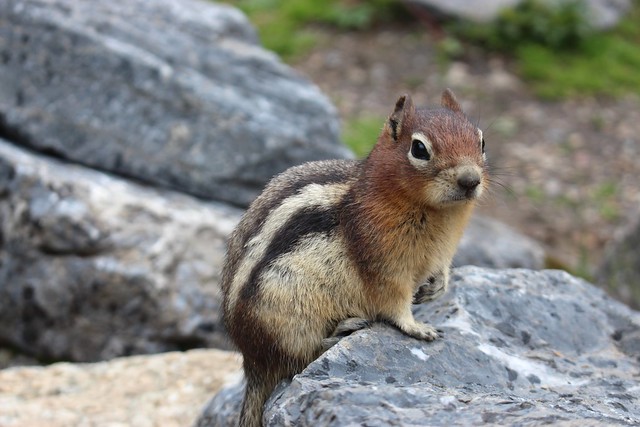 We were greeted by a few locals when we got there. 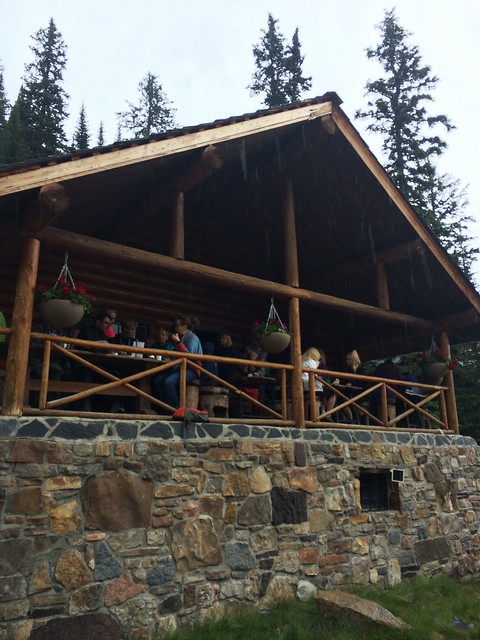 The Lake Agnes Tea House was originally built on the shores of Lake Agnes in 1901 by the Canadian Pacific Railway as a place for hikers to take a break. The log building was replaced in 1981 but still has the original windows, tables and chairs. 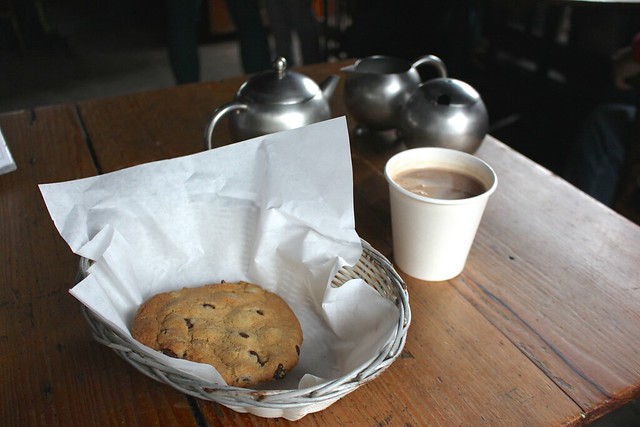 They started serving loose leaf teas there in 1905 and have continued the tradition ever since, with a full menu of drinks, homemade soup and baked goods. The owners and their staff hike the supplies up from below and live up in the tea house during the tourist season. 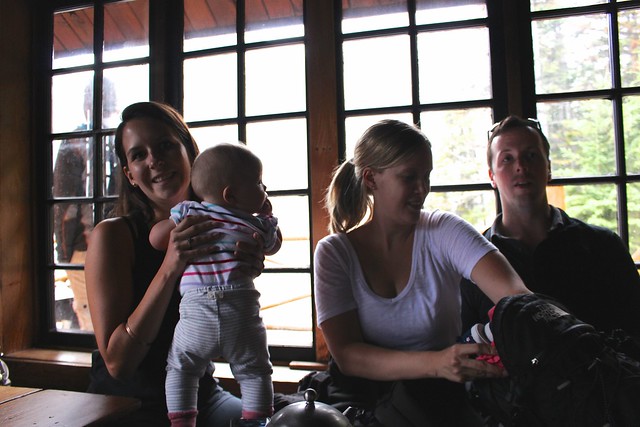 We took a break here for chai tea and chocolate chip cookies while we regrouped.  Want to make friends in a tea house? Just bring a baby. Everyone wanted to stop by and say hi, and marvel at Alison and Dave for carrying all her 17 lbs of love up the steep incline.

Just as we went to leave, a huge rainstorm showed up…and we had another 3.5 km back down the mountain. Thankfully some fellow hikers gave us a backpack cover to wrap the baby’s carrier in. We were all so worried about her getting wet…but she was completely dry and slept the whole way down. Seriously. Oh to be a baby and just get carried everywhere, ha! 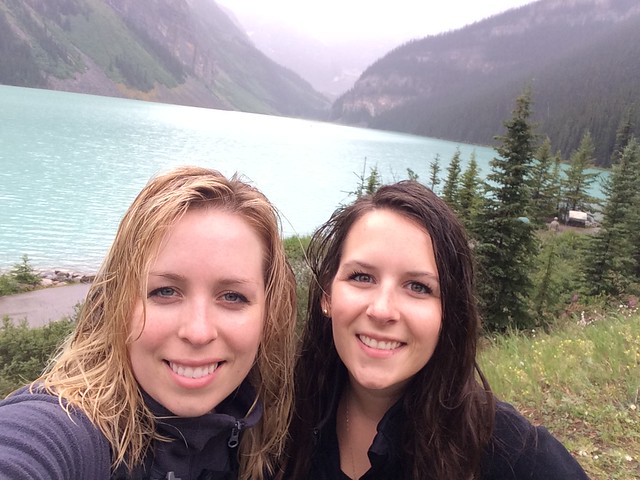 The rest of us didn’t fair so well. We were pretty drenched, but it was a nice break from the huffing and puffing on the way up. And how can you be worried about getting wet when you have views like this all around you? 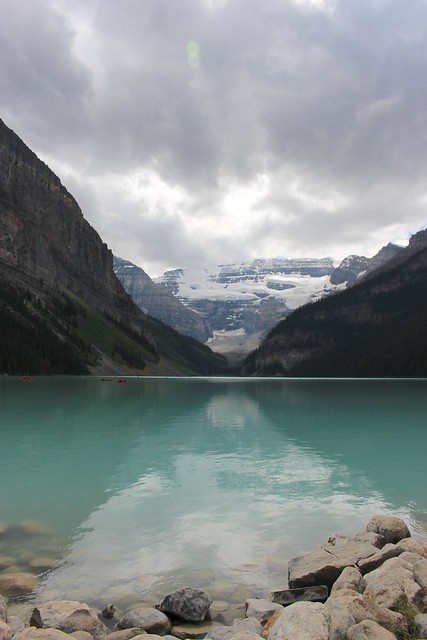 Hands down, this was the coolest hike I’ve ever been on. I’d love to get back out and do more of this someday soon. I’ve already been researching some local hikes for the fall when the leaves start to change here. It’s such a great way to clear your mind!