A couple weekends ago, Garrett and I loaded up the dogs in the car and headed up to cottage country for a weekend getaway with some of my film school friends. 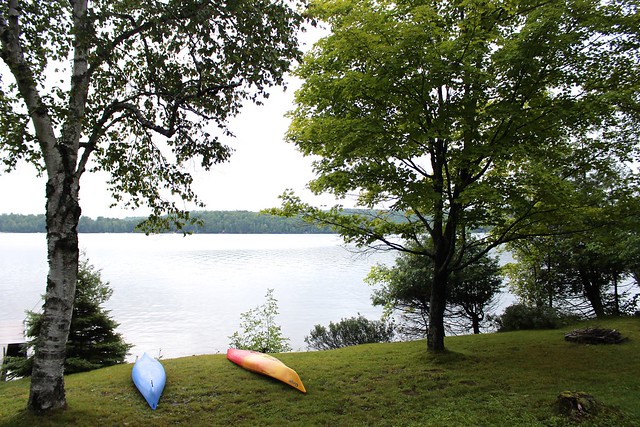 It was such a lovely weekend to disconnect from technology and just hang out with friends. It rained a bit, but we still found ways to entertain ourselves with walks, board games and even a last minute canoe ride (where I was convinced I was going in the water).

My dear friend Ashley was kind enough to invite us all up to her cottage. I was picturing just a simple rustic cabin in the woods, so I was pleasantly surprised when we walked into one of the cutest cottages I’ve ever been to. 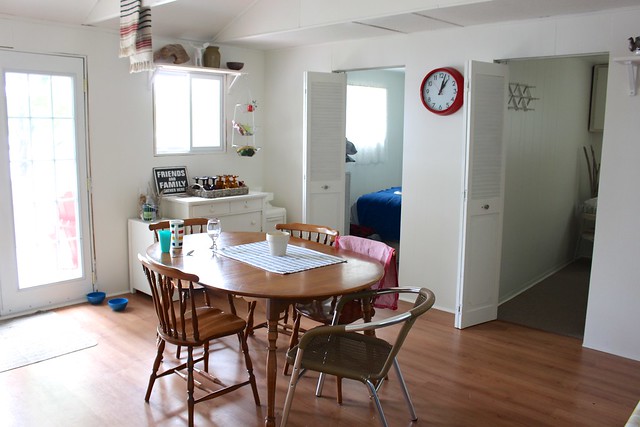 A few years ago Ashley’s mom and her friends gave the whole cottage a new look with freshly painted walls and fun decor. 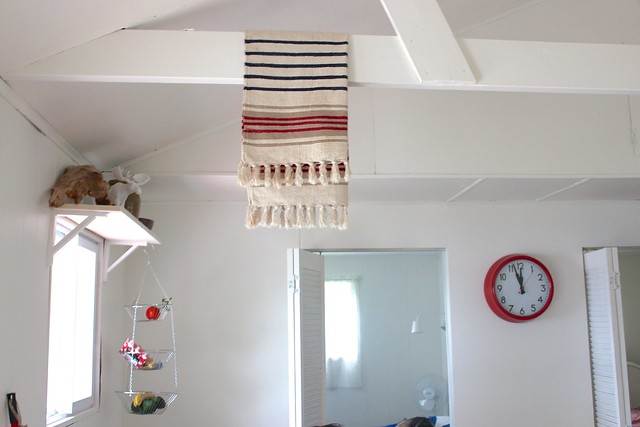 Everywhere you looked there was something to catch your eye. 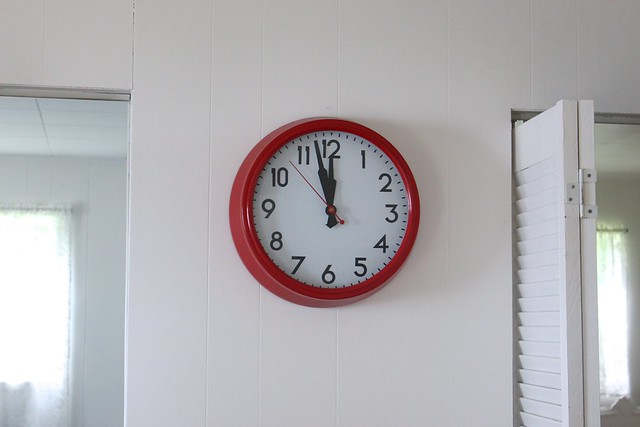 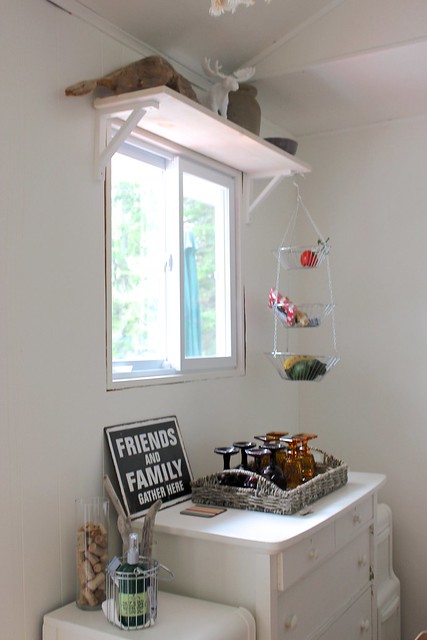 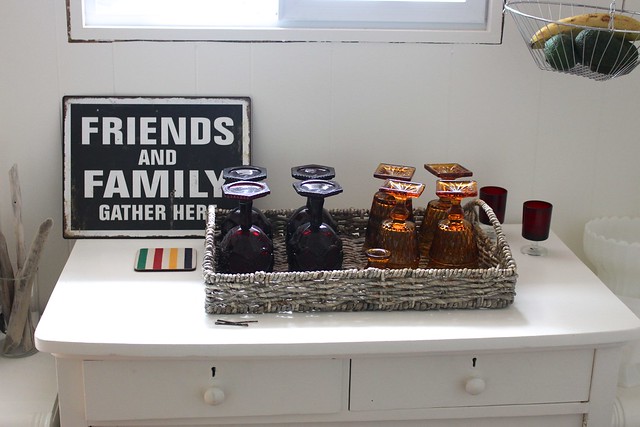 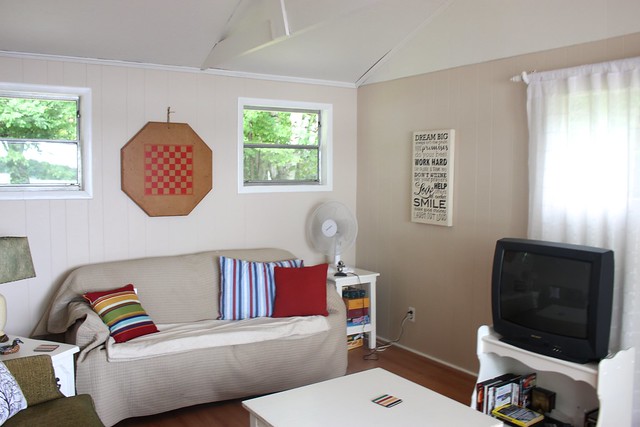 Even the old wood paneling in their living room got an update with fresh paint. It’s is light and cozy at the same time. 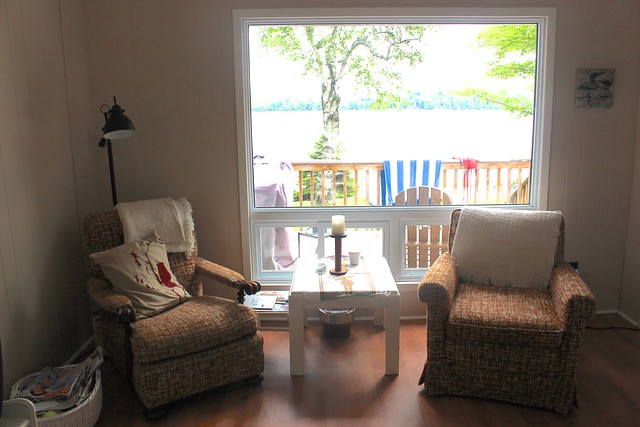 And you got a great view of the lake. 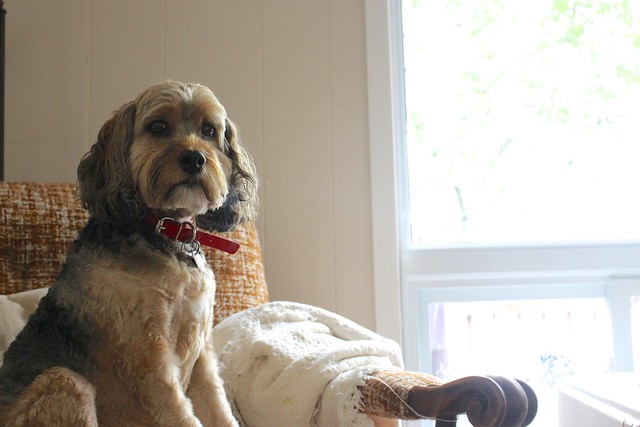 The dogs were quite content to sit in those big chairs and look out the window longingly waiting for the rain to hold up. 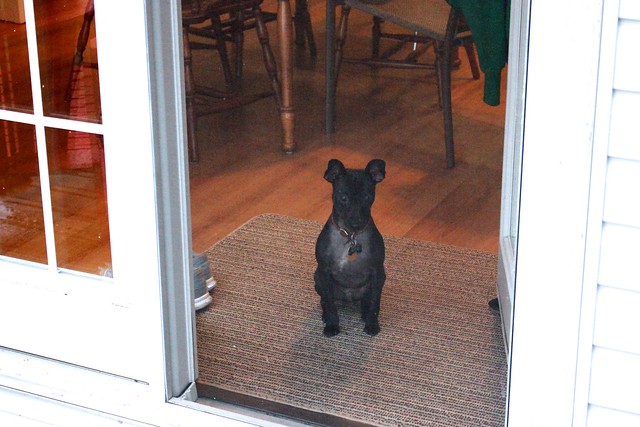 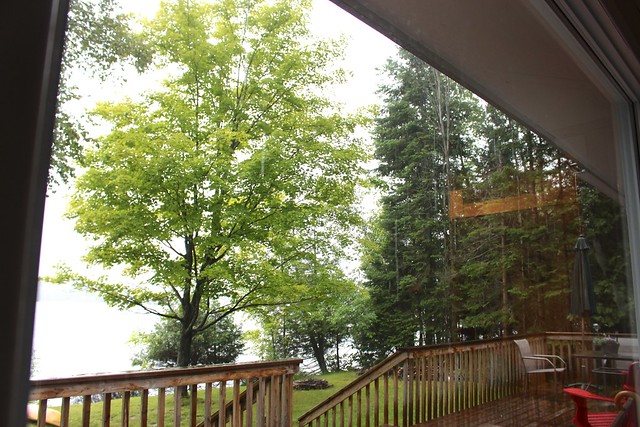 Even though it rained, it thankfully didn’t get to dark. We had plenty of sunshine peeking through those clouds. 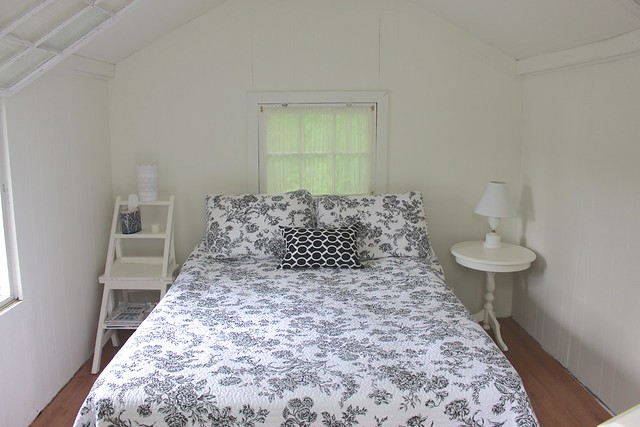 Garrett and I got the bunkie out back, which meant a this lovely little getaway to ourselves…which was really to that if the dogs barked at something no one else had to wake up, ha! 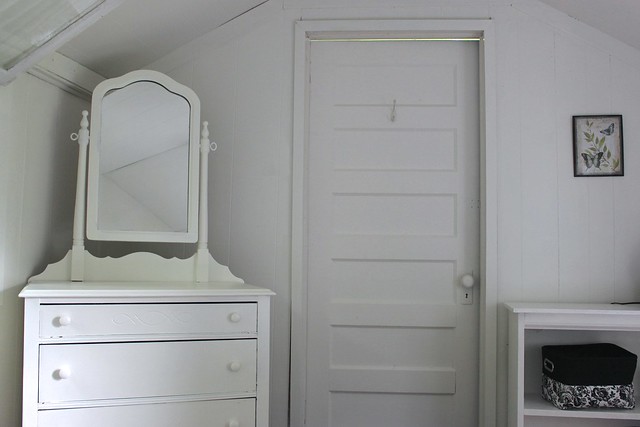 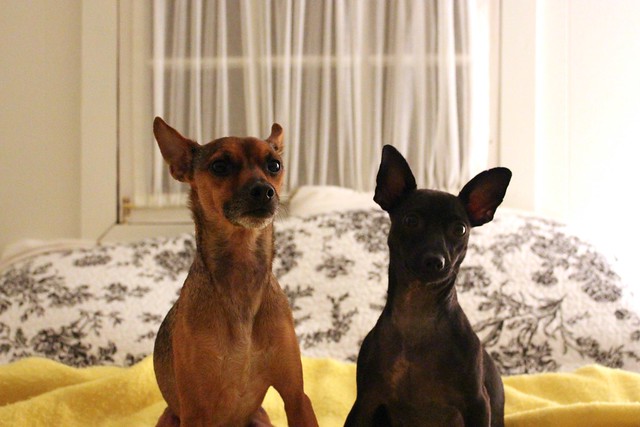 The dogs were fans too. We put a big wool blanket over top of the beautiful coverlet so that the dogs could cuddle up with us on the cold night but not get any of the beautiful linens dirty.

Oh man, food. With so many great cooks in the kitchen we ate really well that weekend. Ashley prepared a great menu that used some of my favorite recipes from the blog (Jalapeno Pinwheels and Cauliflower “No-Potato” Salad) as well as some yummy new things like delicious homemade burgers and her own take on a Tex Mex Quinoa Salad. 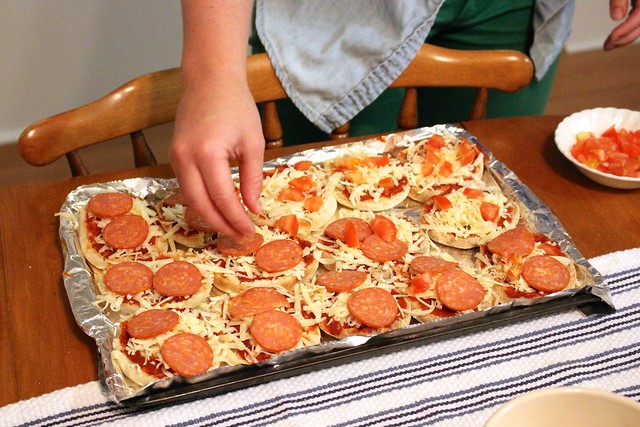 Our first night, we all got in later in the evening so Ashley came up with a great throwback from our childhoods – english muffin pizzas! I forgot how yummy they are. We loaded our up with sauce, mozzarella, pepperoni and lots of fresh veggies. They were popped in the oven until the cheese was bubbly. 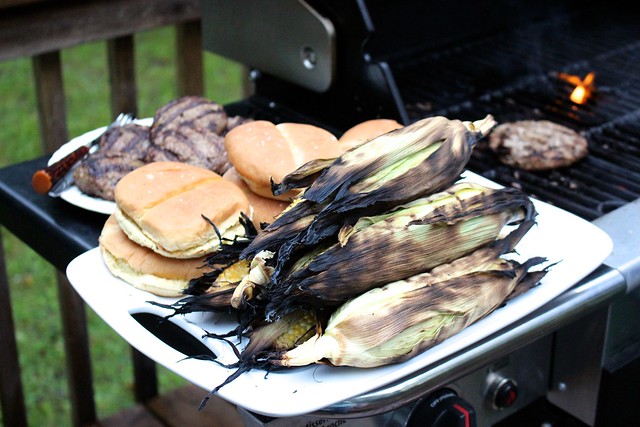 Another hit meal was homemade burgers and grilled corn. In the past I’ve done grilled corn with a cilantro lemon butter, but Ashley shared a really simple yet yummy method – a wedge of lime squeezed all over the kernels and topped with freshly ground sea salt or black pepper. It was soooo good! 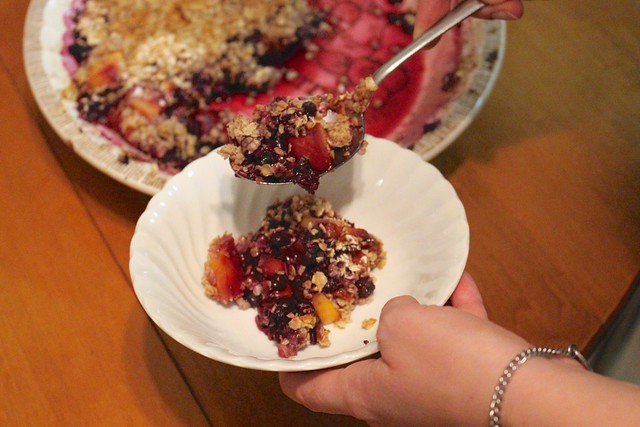 On Saturday night, we stayed in to play boardgames (this one and my new fav) and took an intermission to have some homemade crisp made with blueberries and Ontario peaches. I made it up as I went, but it was similar to my Nana’s Apple Crisp recipe. 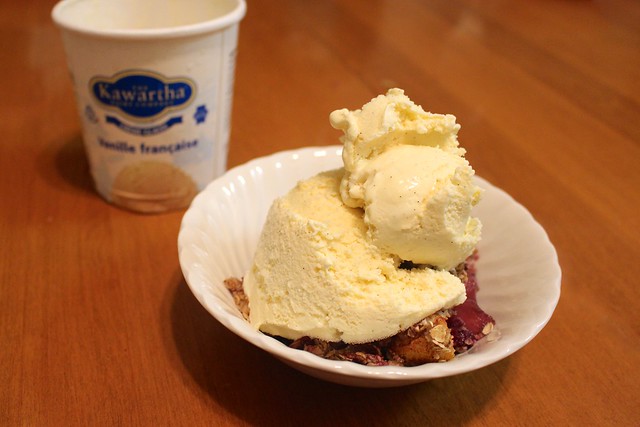 We topped it off with some Kawartha Dairy french vanilla ice cream – a cottage country must! 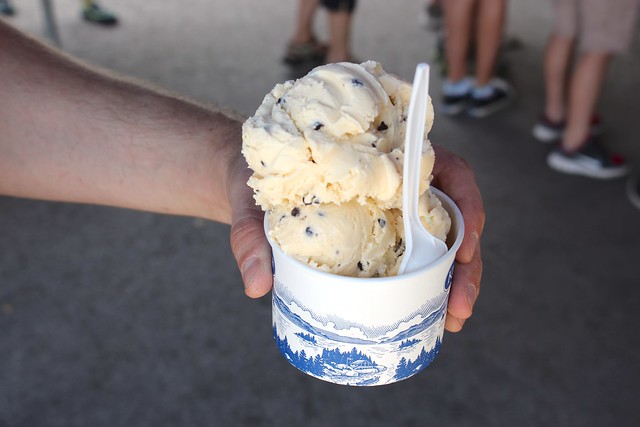 We went back on Sunday before we left town to grab some more for Garrett. This was a “small” chocolate chip cookie dough.

The Town of Minden, Ontario 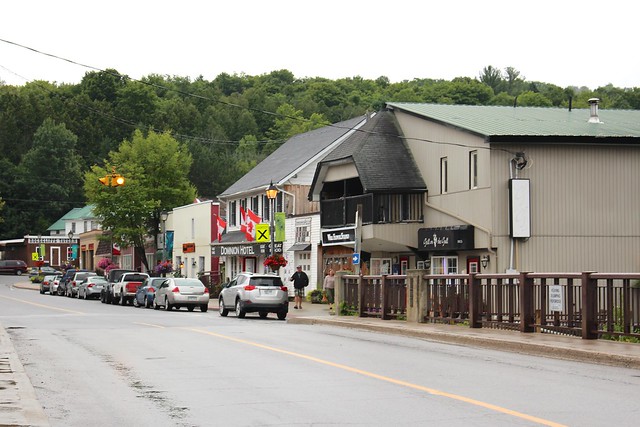 On Saturday afternoon, we made the trek into the town of Minden to look around at a few shops and check out the area. We knew there was a town fair on that weekend (which we didn’t end up going to), but while we were trying to find it, we came across an outdoor museum at the Minden Hills Cultural Centre. The buildings were closed but we were still able to wander around. 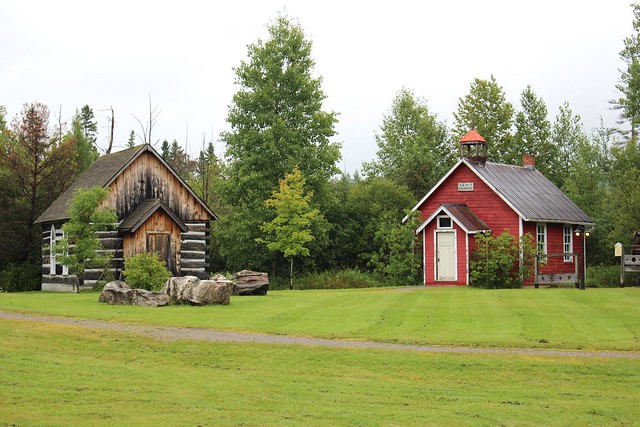 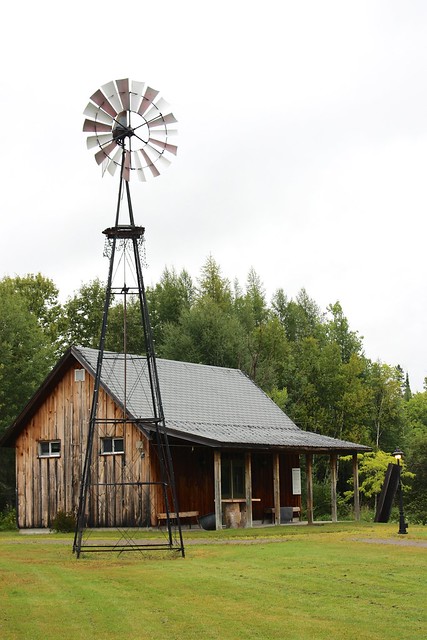 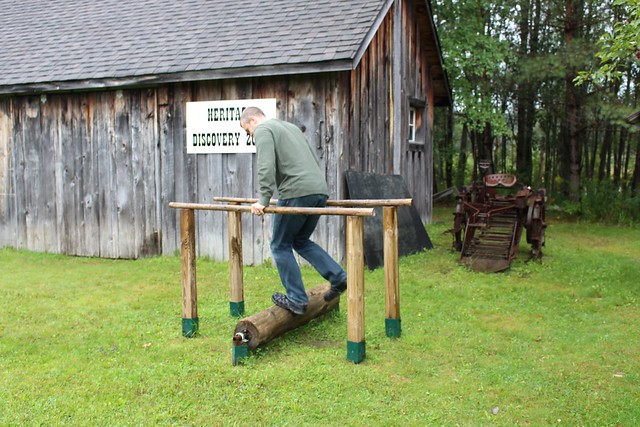 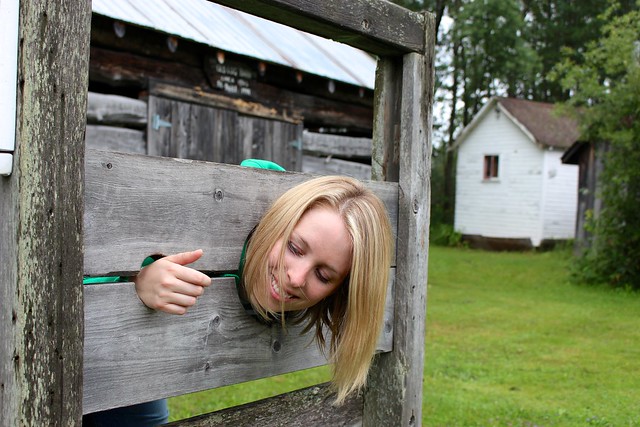 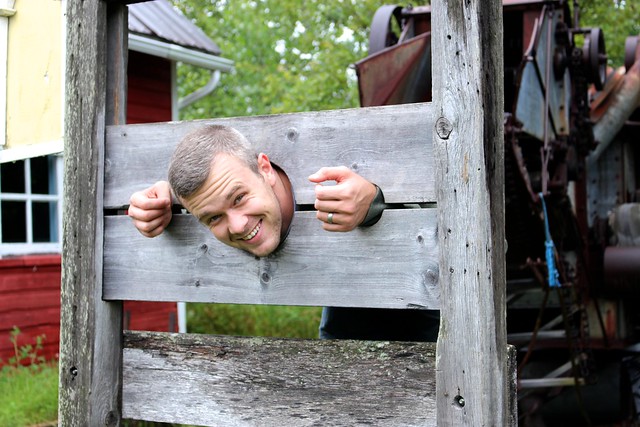 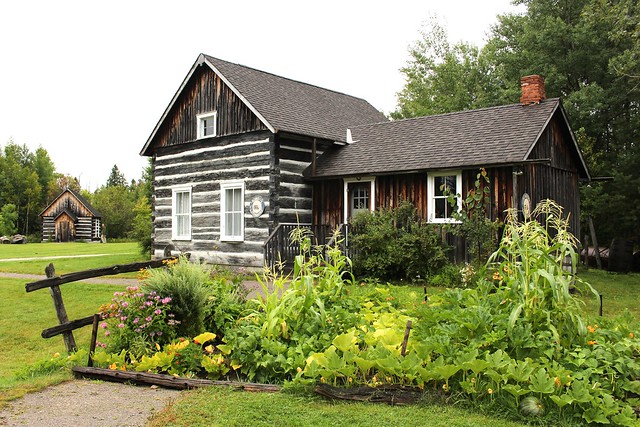 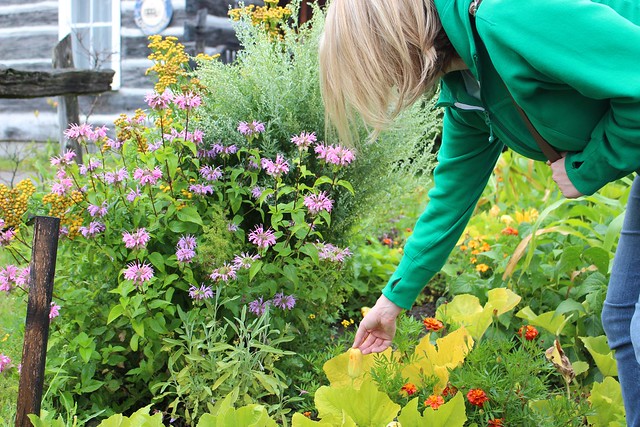 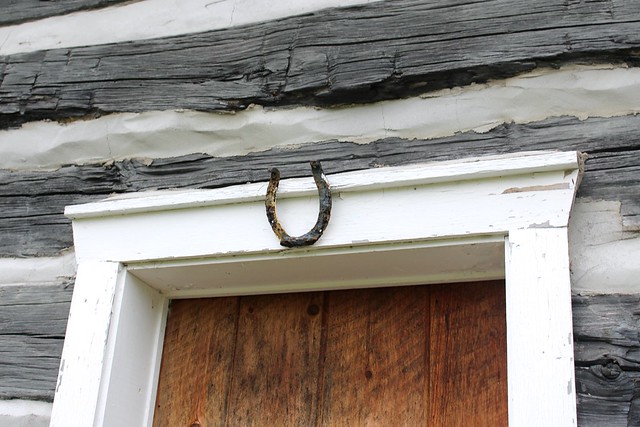 It was a really lovely weekend away that made me appreciate how lucky we are to have such great friends. All us girls came from the same film school program and it’s interesting to see how life has taken us all in different paths….but we’re still able to find time to gather around the same table to tell stories, talk about the big questions in life and share some real good food. I hope we’re still doing that in another five, ten, twenty years.