I hope you all have been having a wonderful holiday! I’ve had a great week with family and friends, but it feels good to be back home now too. I’m going to keep the posts light until I’m officially back in action on January 5th, but I thought I’d pop in with a little recap of some of the Christmas festivities! 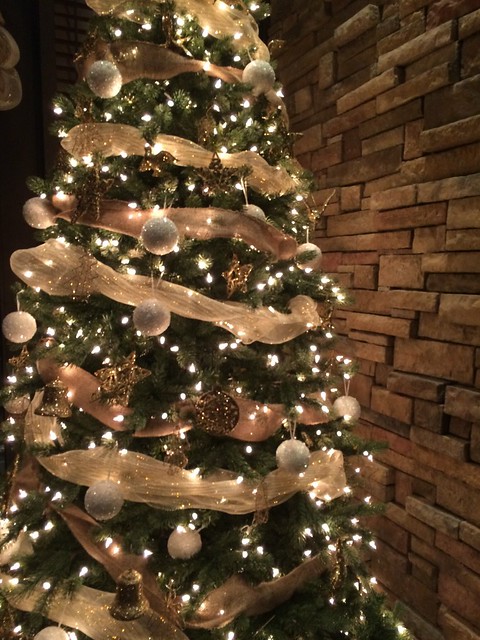 Our Christmas week started with a dinner for two at The Keg Steakhouse. Garrett got some gift cards for his birthday last month and he thought it would be nice to use one for a little date night before all the family time started. 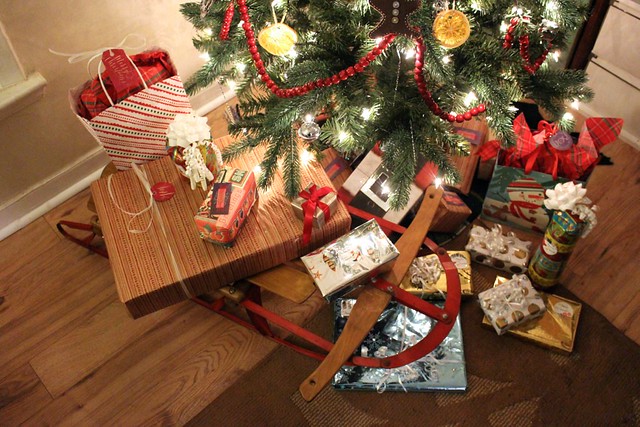 Afterwards we went home, turned on the tree, cranked up the Christmas oldies, and exchanged our gifts to each other (and the dogs). It was really nice to have a cozy little Christmas together and take the time to go over the gifts we got each other and talk about them. 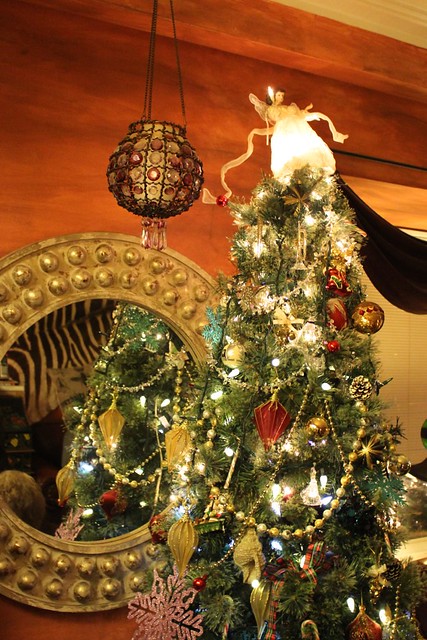 The next day we had Christmas dinner with Garrett’s side of the family. 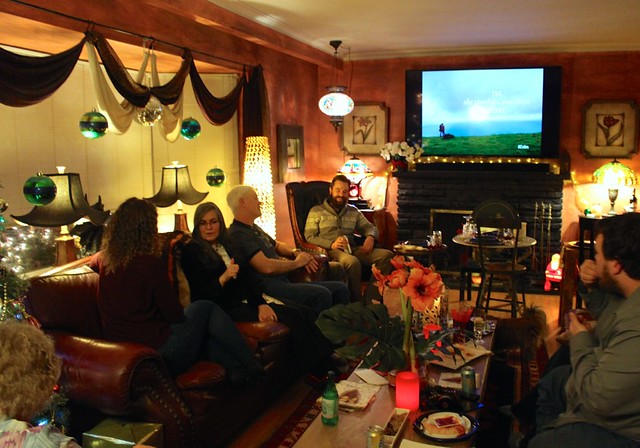 It had been awhile since we’d seen some of his cousins (the wedding, I think?), so it was really nice to catch up with everyone and celebrate together. Dinner was delicious as always, with lots of different meats and side dishes (I brought homemade mac and cheese). 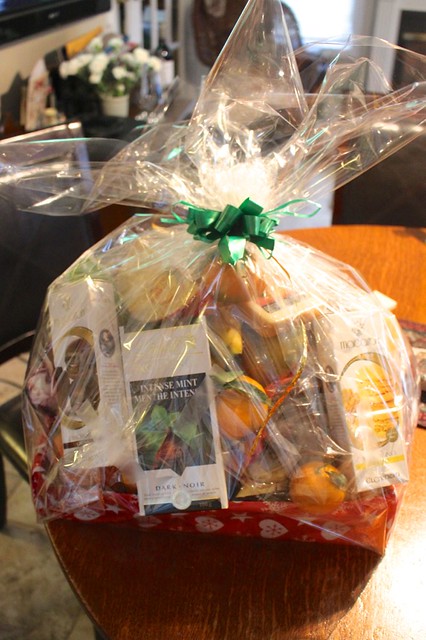 That night I headed to my parents with the dogs in tow. I helped my mom and great aunt put together this giant basket for my cousins. My great aunt always loads it up with lots of goodies for them to take skiing – fruit, fancy cheeses, crackers, cookies and chocolates. 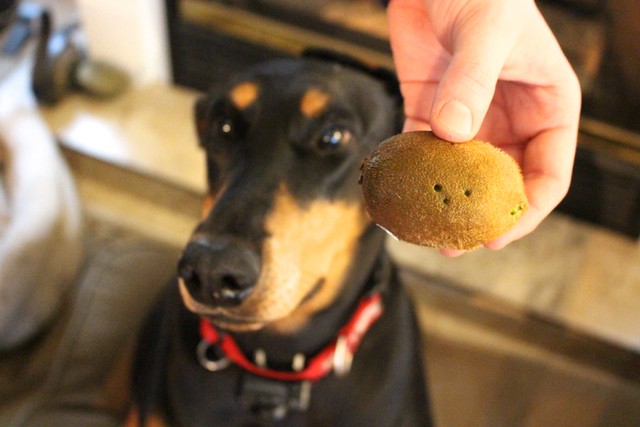 We found a kiwi that had rolled away and was taken hostage by a very curious doberman. 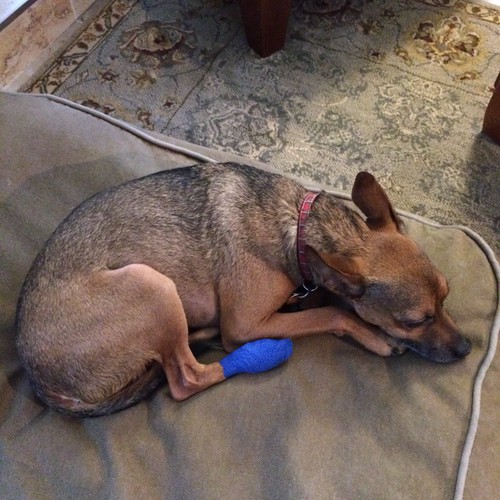 On Christmas Eve, I let the dogs out in the morning and Whiskey came back with a paw that was badly bleeding. It looked like he’d gotten his foot caught in a fence and scratched it. Thankfully my dad was there to help with doggie first aid – it took three of us to keep him calm to clean it up and bandage it. 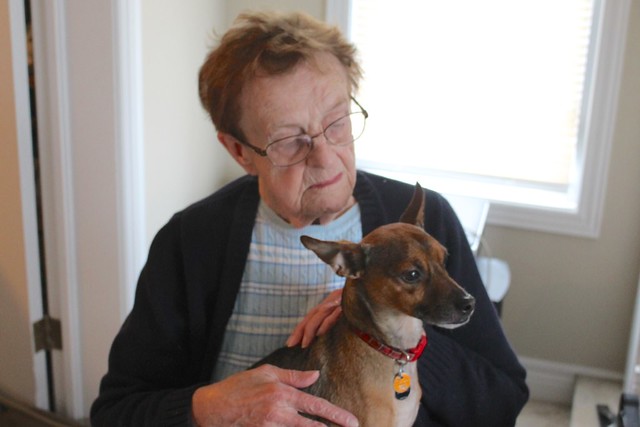 He spent the rest of the week hanging out on my great aunt’s lap or tucked in beside her on the couch. He’s still favouring it a bit, but I’m glad to see he’s coming around now. 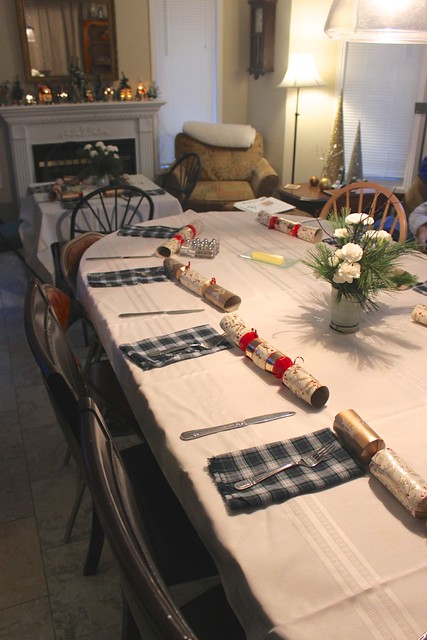 We had family who couldn’t make it into town this year, so we were down to 13 people and in our family that means you have to split the tables. My great aunt believes it’s bad luck to sit at a table of 13, so either we split tables or someone has to sit out – ha! 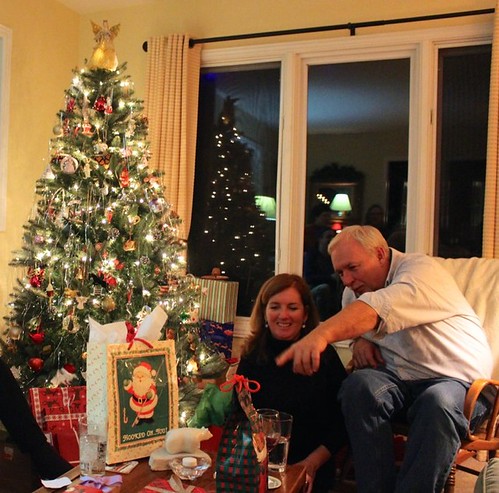 After dinner we did the $5 gift exchange, which is always a good laugh. Everyone gets so competitive to see who can get the heaviest/biggest gift in the pile (this year it was a cast iron brownie skillet!). I lucked out and snagged a deck of Tim Burton playing cards from MoMa in NYC and Garrett got a multi tool pen that promptly went into his desk so I couldn’t snatch it up! 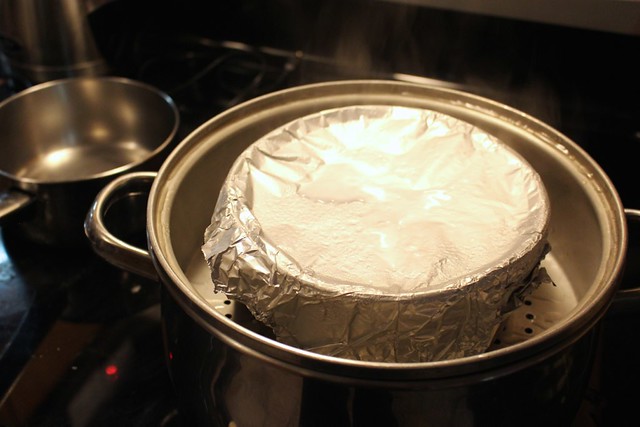 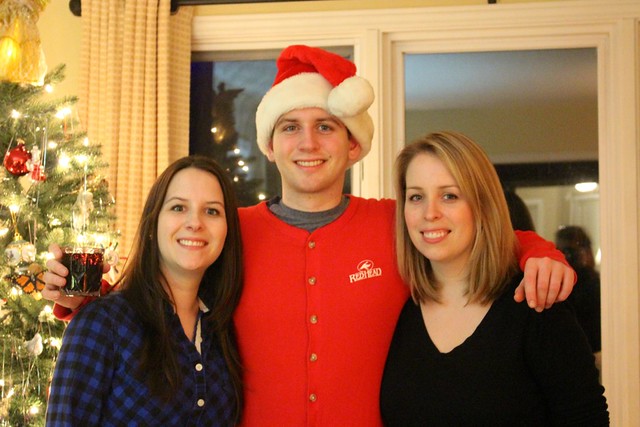 Once all the guests left, we hopped into our Christmas pjs and settled in for some late night crokinole and cocktails. 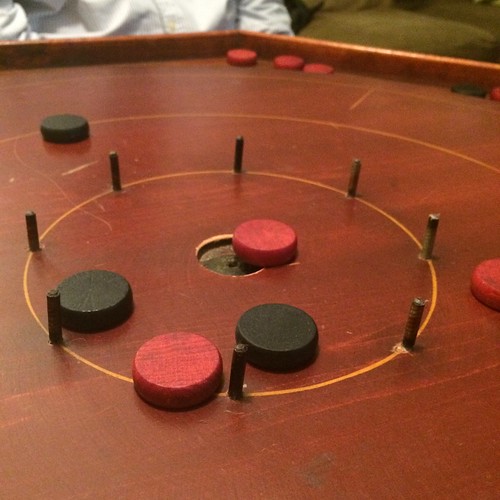 Have you ever played crokinole? It’s one of my family’s favourite games – and I love that we play on boards that our great grandfather made. 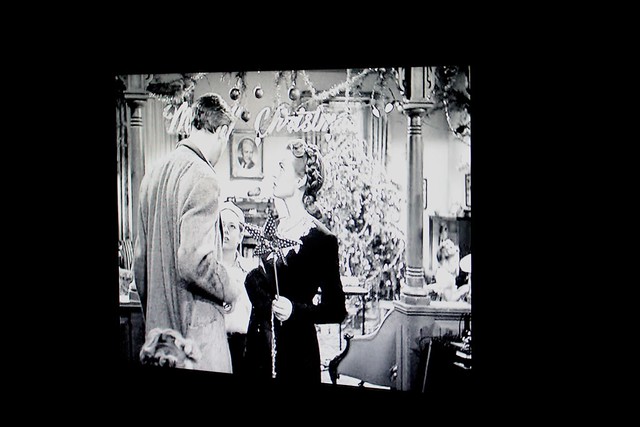 As is our family tradition, we had It’s A Wonderful Life playing in the background, but we all called it quits before poor George Bailey even met Clarence – we were wiped! 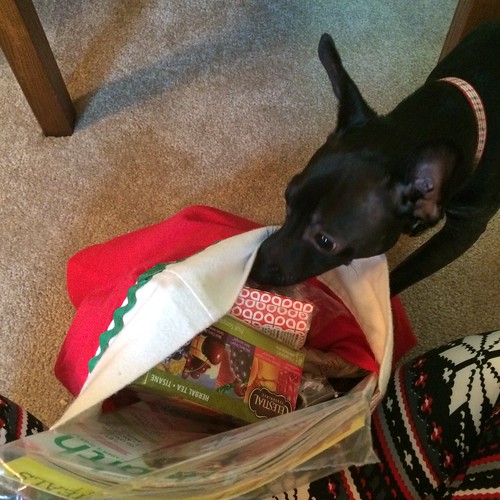 On Christmas morning we made coffee and tea, and got the gift opening started with stockings. Cola was happy to help out. 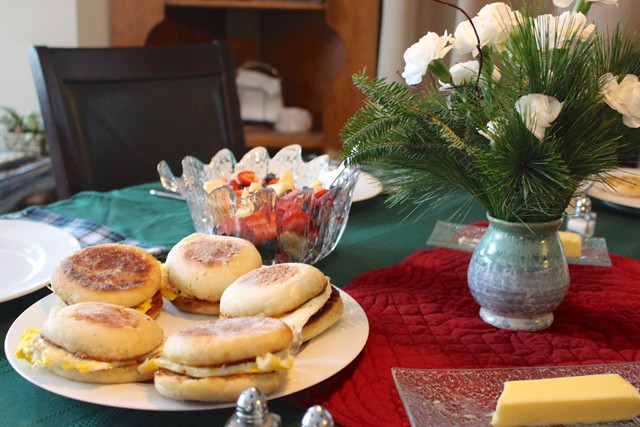 We followed that with one of our favourite family breakfasts – dad’s english muffin egg sandwiches with Canadian bacon, and mom’s fruit salad on the side. 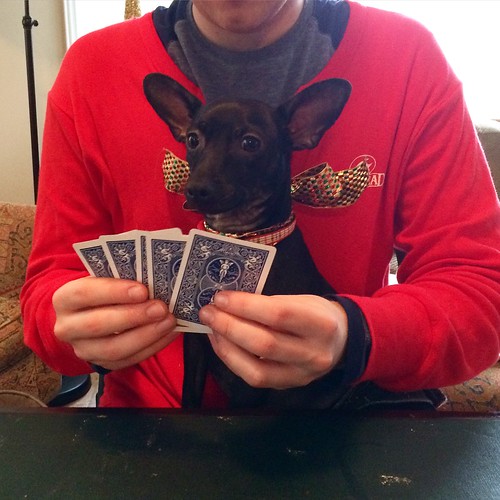 The rest of Christmas Day and Boxing Day was filled with many naps, Euchre and more food. 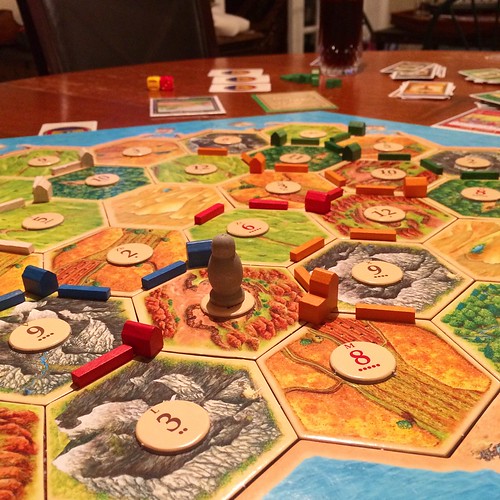 Santa surprised the family with a new (to us) game – Settlers of Catan. Some of us had played with friends, but the rest were able to catch on quickly. We played at least four games before the weekend was out, and I’m sure we’ll do at least one more round before everyone is officially back to work and school. 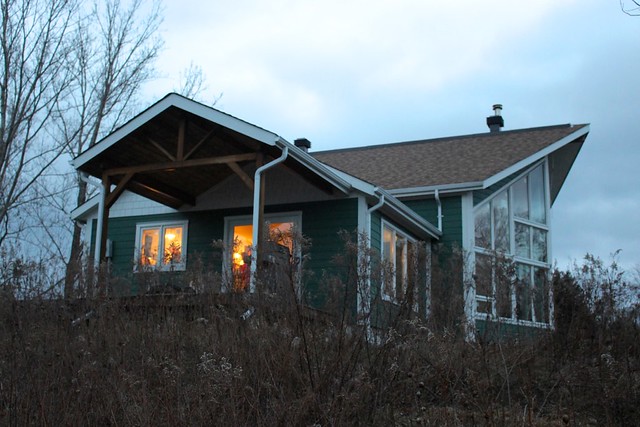 On Saturday night, we finally got out of our comfy clothes and headed over to visit one of our dear family friends who just moved into a house he’s been building. 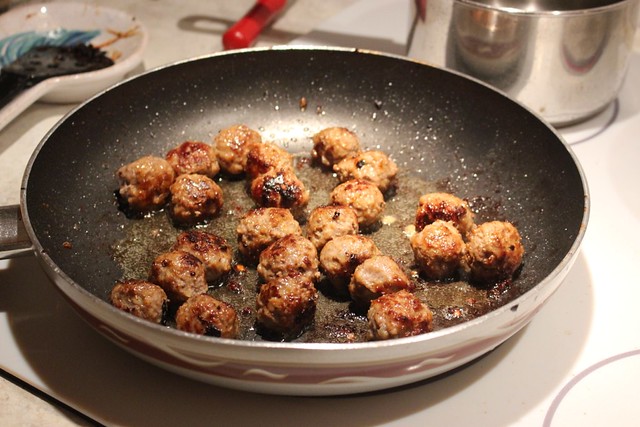 He’s from Sweden, so we were treated to some real Swedish cooking – including meatballs! 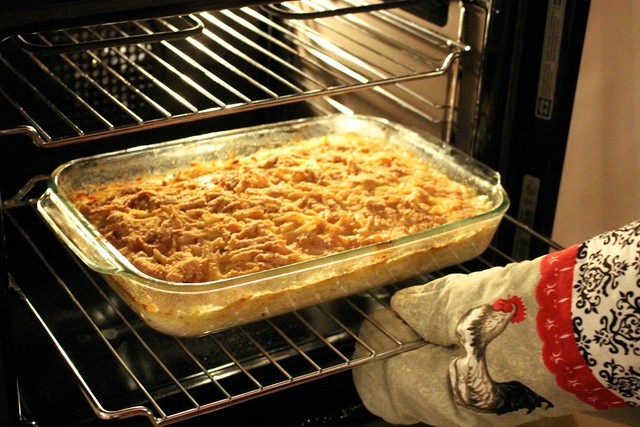 There was also a potato dish I’d never heard of before – Janssons Temptation. 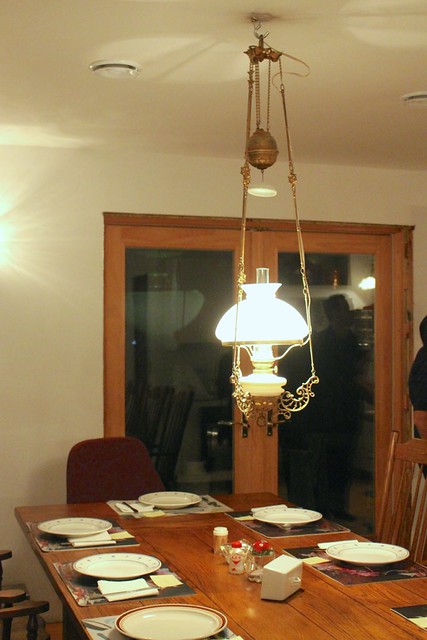 This nautical themed light hanging above the dining room table is from his grandmother’s farm in Sweden. When you want to get more light, you pull the lamp down and the counter weight above balances it. When you’re finished, you can gently push it back up. 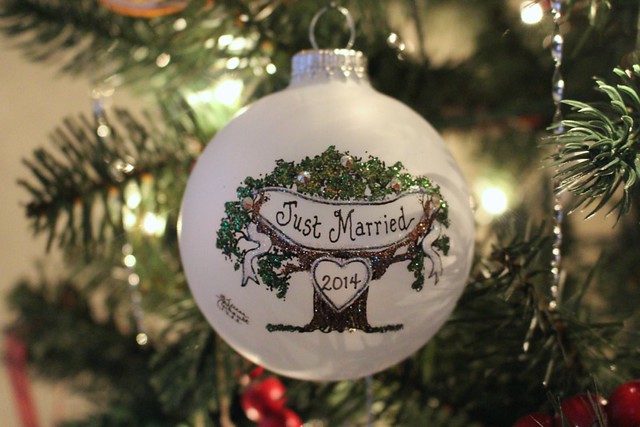 It was a really lovely Christmas with one exception – Garrett and I were apart the whole time. He got terribly sick on the 23rd and stayed home under quarantine from the rest of us. I tried to come home a few times but he insisted I stay away or risk getting the flu myself. It was hard to spend our first Christmas as a married couple so far apart, but I’m glad that he is on the mend now and we’re back home together. The dogs sure missed him too!
/ / /
Have you been having a good Christmas break? Any big plans for New Years?