When I first started to write out this post, it wasn’t long before I started to realize it was turning into a novel. Thus today’s post will be about how my family built the coop and tomorrow morning I’ll share how it looks now that we’ve got it set up at the farmhouse. We’re about 11 weeks into life as chicken owners so please keep in mind that we’re just learning as we go. 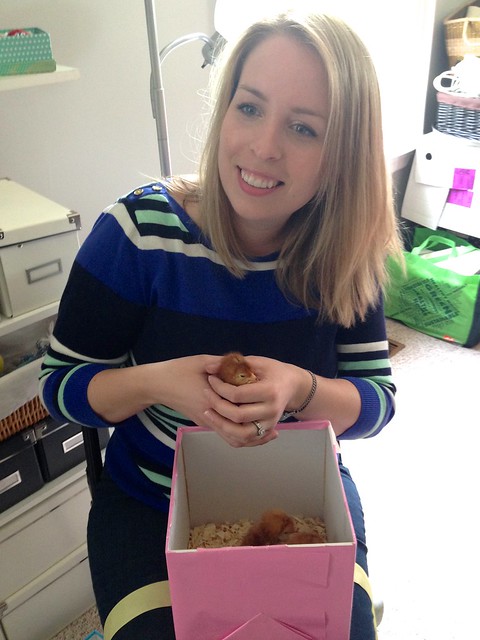 As you may recall, the day after we moved into the farmhouse this May, my family surprised me with five baby chickens. It was a real “welcome to country life”  30th birthday present. 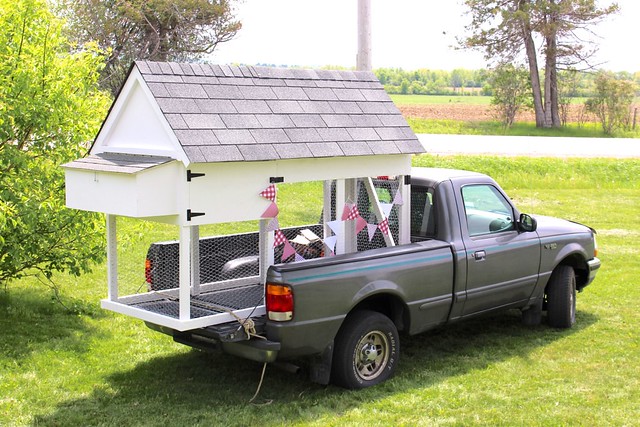 Along with the chicks came this amazing, custom built chicken coop that my family built together. When I saw it in my yard, I was in complete shock. 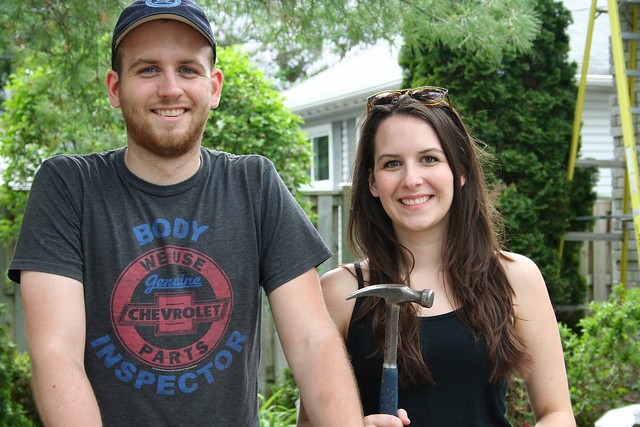 In the weeks leading up to my birthday my brother and sister came up with the idea as a sort of joke, that slowly turned into a “we’re really doing this” project. Over the span of a week, they designed, built and painted the coop. 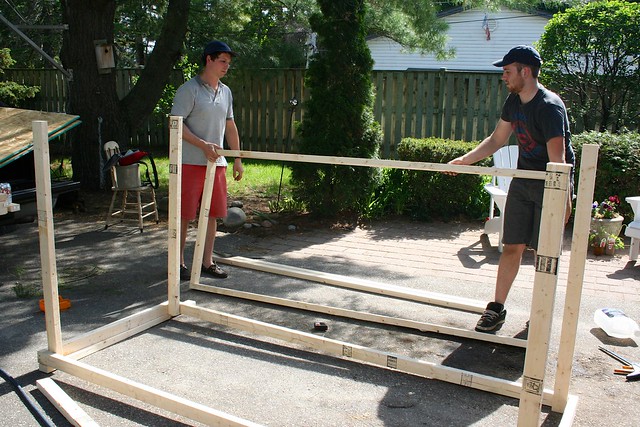 With the help of family and friends, construction began the minute I left my parents’ house on the holiday weekend. While I was painting my parents’ back porch, they were all waiting for me to leave so they could start. 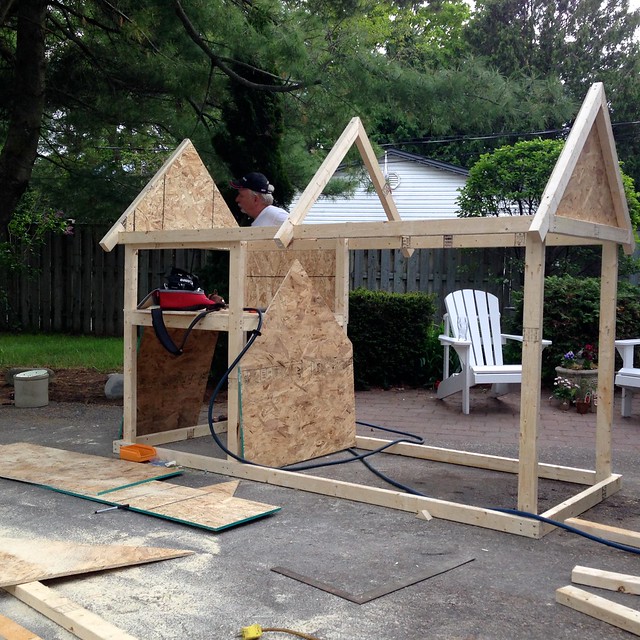 For a week, they kept me in the dark – and I really had no idea that this was all going on. I was busy packing for the big move that weekend and every time I called to say I was stopping by, they had to carry the coop down the street to hide at our neighbour’s house! 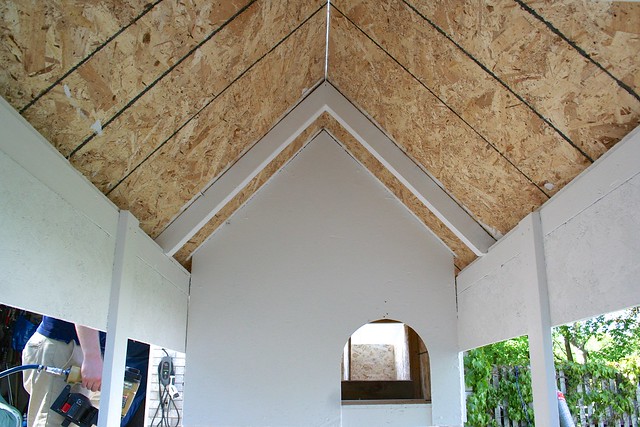 The design came from free chicken coop plans they found online, but they quickly started making modifications. That’s what happens when you have my family working on something. Think of Tim Allen in Home Improvement – bigger is better. Part of the modification was making it a full foot taller – from 3 ft to 4 ft. It might not seem like much, but having that extra foot means I can get in and out of the coop really easily. I thank them every morning when I’m letting the chickens out. 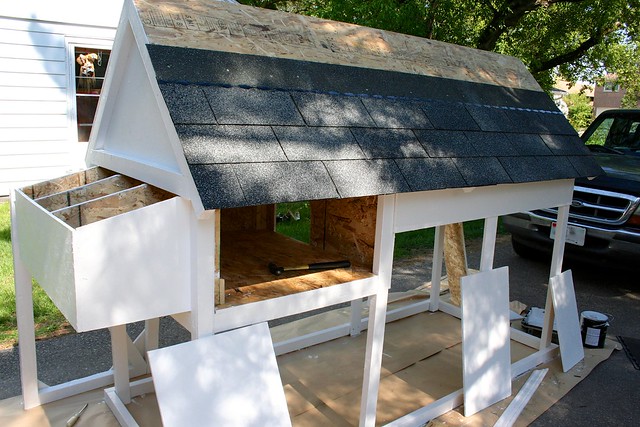 The whole coop got painted in my favourite Behr Marquee Exterior Paint colour – Cameo White! It’s the same colour we’re using on much of the exterior restorations. 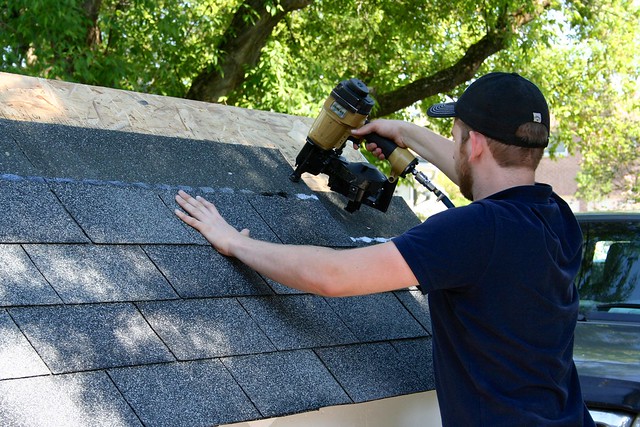 The roof was covered in real shingles to protect our little chickens from the rain. 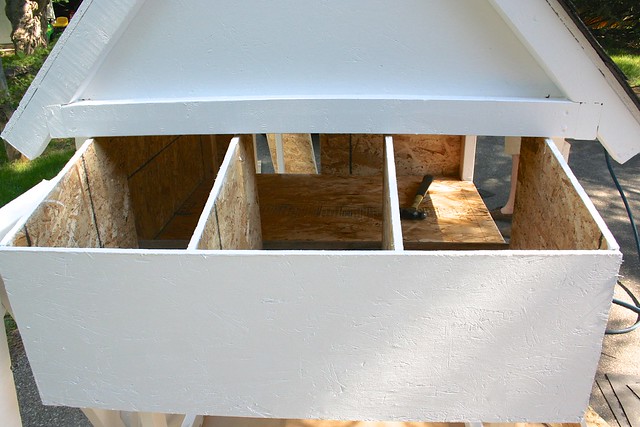 In the back are three nesting boxes, where they will hopefully start to lay eggs in the next month! 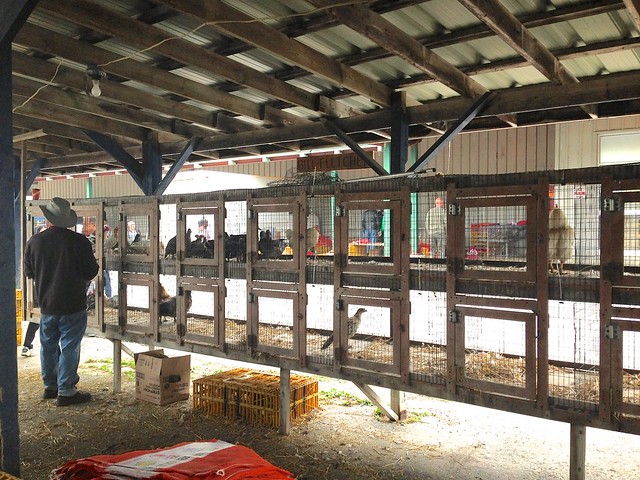 On the day before my birthday, my brother said he was going to be late getting to the apartment to help with the move, and now I know why. He and my sister got up at the crack of dawn to drive to a farmers market to pick up the chicks. 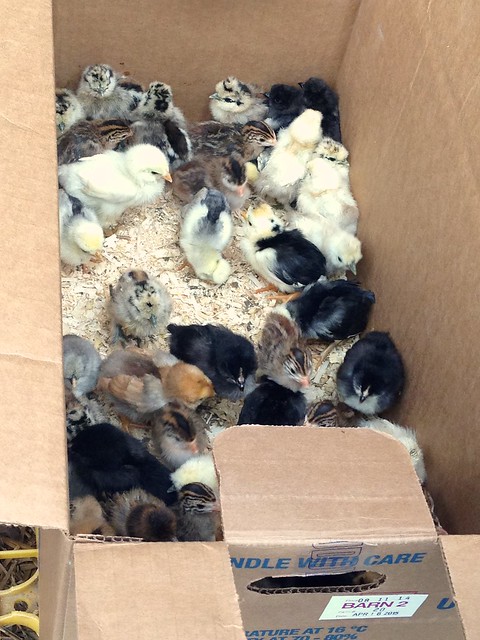 They could pick from a variety of breeds in every colour you could imagine for a chick. In the end they chose Red Star chickens, which are known to be very friendly and are great egg layers. 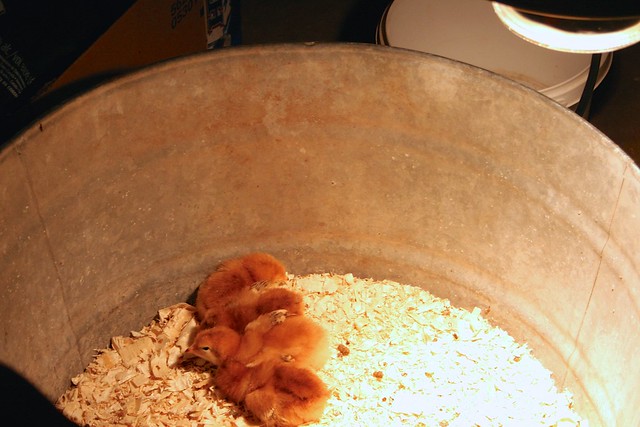 As soon as they got the chicks home and put them under the heat lamp, they all collapsed asleep. Everyone was worried that they’d killed them – but I guess it was just a pretty exhausting trip for these little guys. 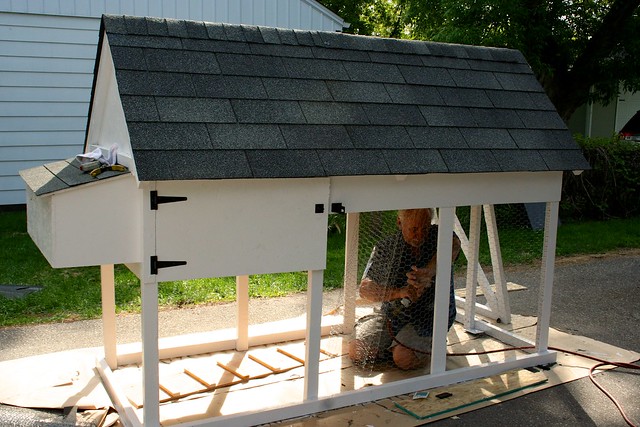 On the morning of the party, while I was getting the house ready my family was feverishly rushing to finish the coop. Up until the moment they left, they were stapling chicken wire on it and touching up the paint. Little did I know this was going to be in my yard soon! 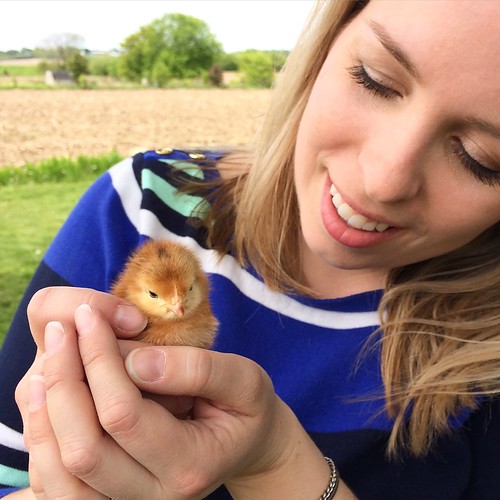 The chicks were such a big surprise but within five minutes I fell in love with them. 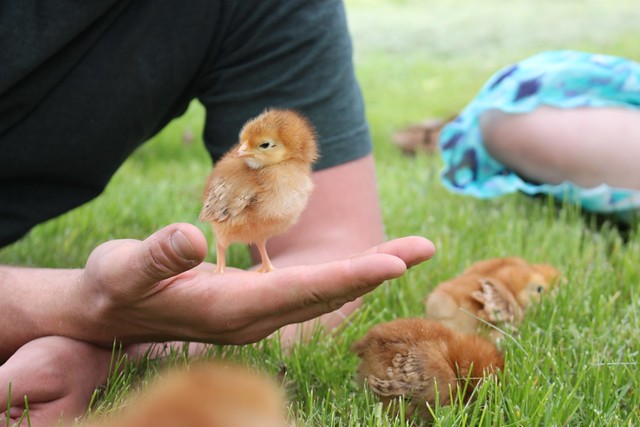 And thankfully Garrett did too. He’s just as smitten as me and just wait until he can get fresh eggs every morning for his breakfast! 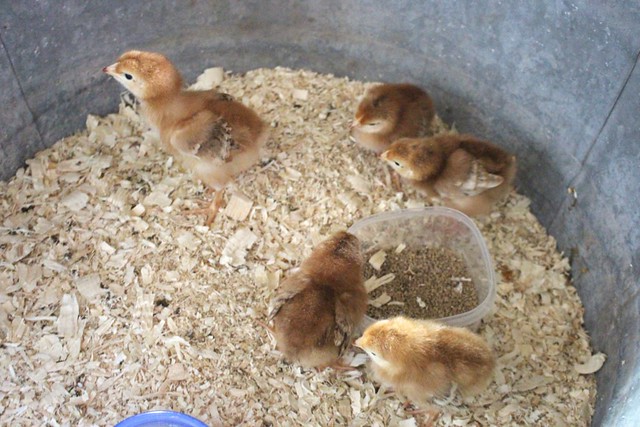 Over the next five weeks, they lived in a big metal tub in our mudroom. We were constantly feeding and watering them, with occasional trips out onto the grass when it wasn’t raining. I was so worried about them dying but the lady at the feed store (who has become my new friend now, ha!) assured me that as long as you can keep them alive until their feathers come in, they should be okay. 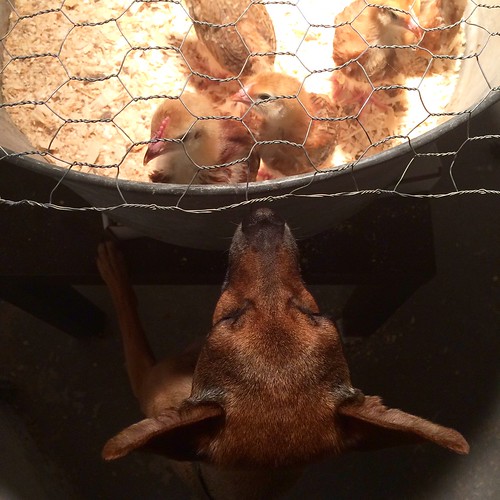 Our biggest threat was Whiskey. He was obsessed with them and still is to a degree. Now that they’re bigger, we’ve had him in the coop with them under our supervision and he is okay, but I would never trust him alone. Cola couldn’t care less what they’re doing, as long as it doesn’t get in the way of him digging holes and chewing sticks (his two favourite new pass times now that he’s a bonafide country dog). 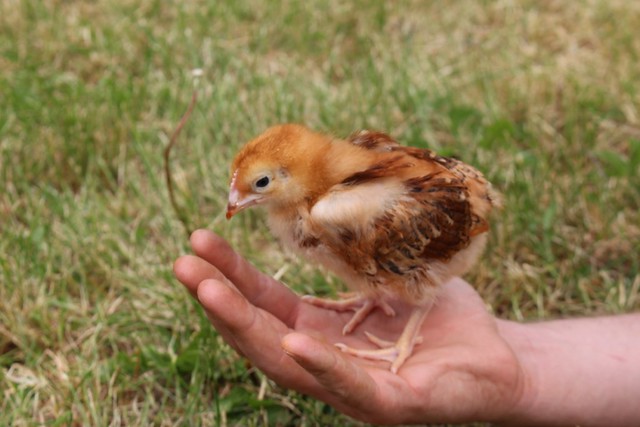 It was really fun getting to see them grow up so quickly. Within two weeks they had started to double in size and we had to start thinking about where to put the coop…