For the last couple of years, my parents have wanted us to all have a Christmas vacation to their house in Southwest Florida. It had been nearly three years since we’d all been down there together and with the first grandchild on the way, we weren’t sure when this opportunity will come up again! 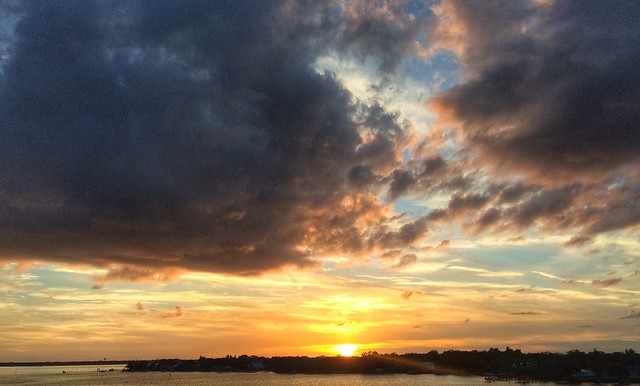 On Boxing Day, we loaded up the cars and headed south for sunny skies and warm weather. We’d been lucky to have a very mild November and December in Canada, but man did it sure feel good to get those warm breezes as we headed farther and farther south. 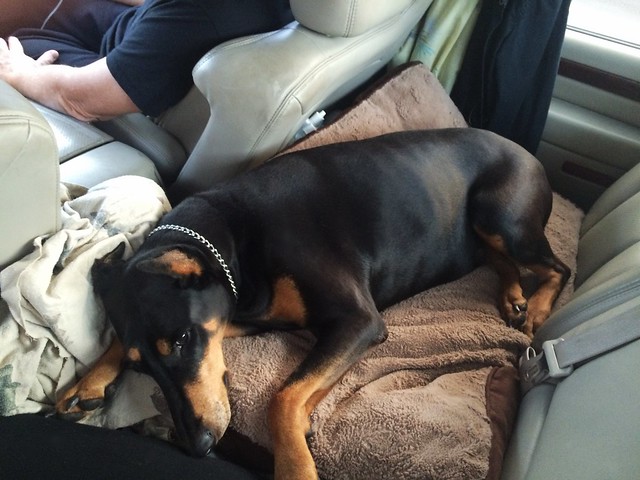 It was a long two days of driving (especially when you’ve got to share the back of the truck with a melodramatic doberman), but it was a good chance to all catch up after the craziness of Christmas. 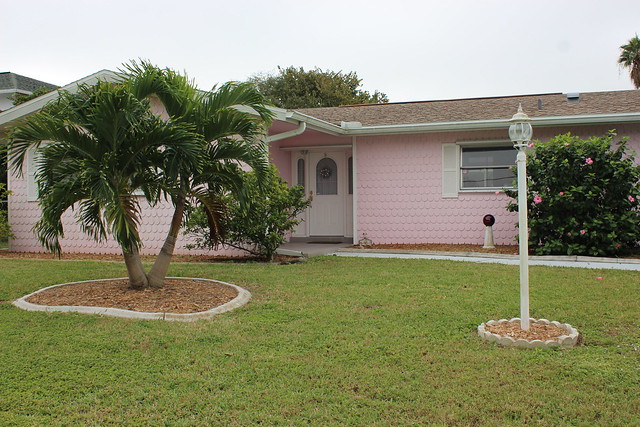 It was a welcome sight when we pulled up to our little pink house on the second night. It had been nearly three years since I’d been down to see the place, and my parents have done quite a few things to spruce the place up. 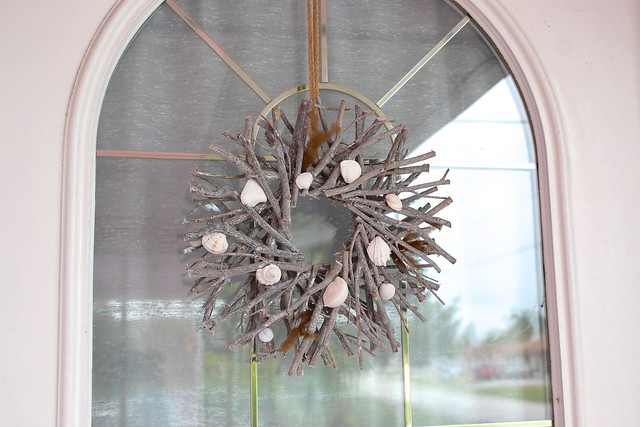 My mom even had some Floridian Christmas decorations up, like this adorable driftwood and seashell wreath. 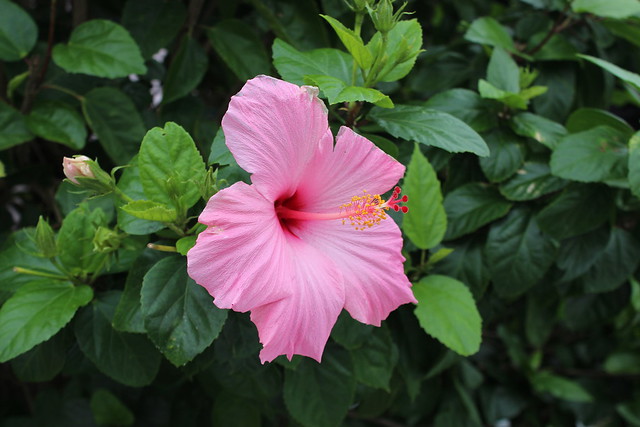 Even though I’ve been down there before around the holidays, it still is hard to wrap your head around having all the jolly festive spirit…and seeing tropical flowers everywhere. 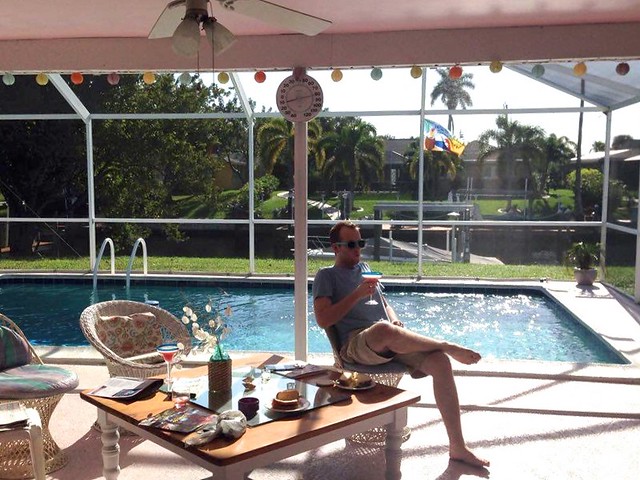 It didn’t take long for us to all get into vacation mode. For the first week, we swam in the pool at least once a day. It was almost as warm as a bath from all the unseasonably warm weather. 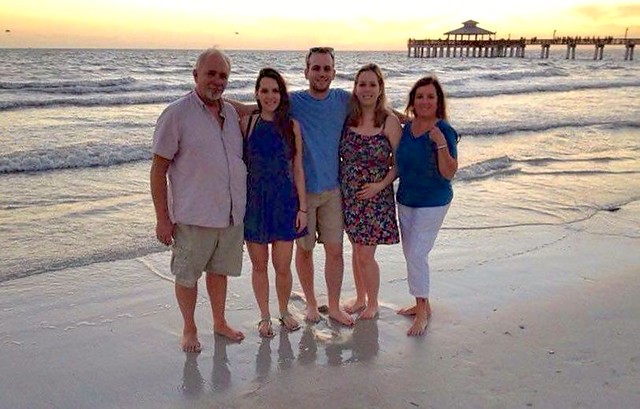 It’s been a busy year for everyone with new houses, jobs, school, etc, so it was nice to have this down time to celebrate together without all the everyday distractions. Unfortunately Garrett couldn’t make the trip this year, but he really encouraged me to go to spend time with my family and I’m glad he did. It was a much-needed break! 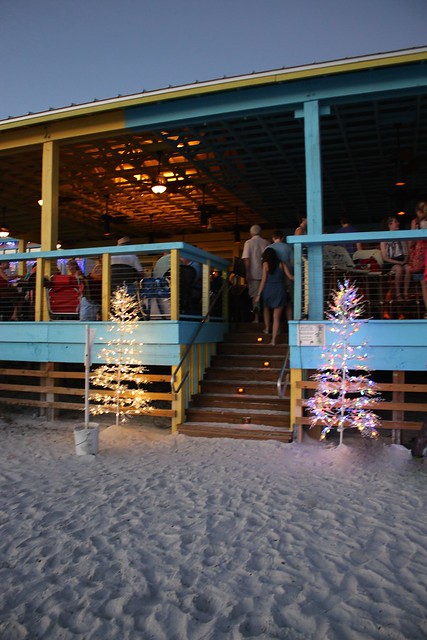 One of our first nights, we headed down to the beach for cocktail hour while watching the sunset. 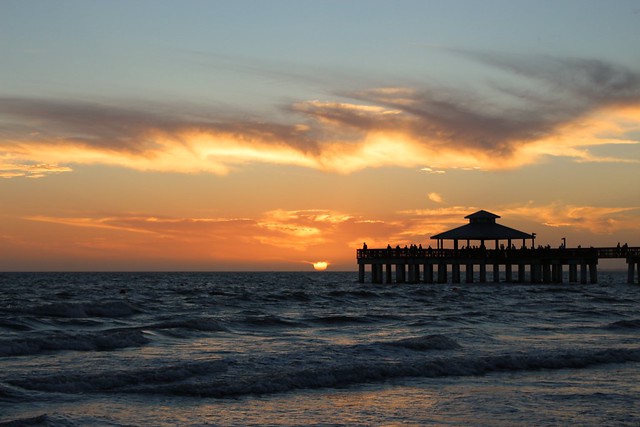 It never ceases to amaze me how beautiful these Southwest Florida sunsets can be. The colours are almost surreal. 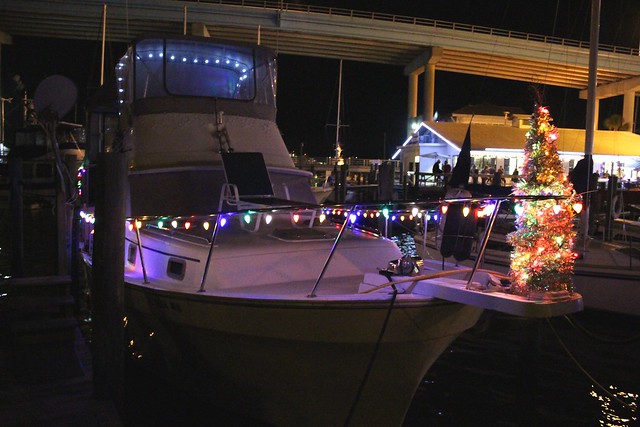 On the way home, we made a stop into one of my parents’ favourite haunts along the harbour, to catch some live music and look at all the nice Christmas lights on the boats. 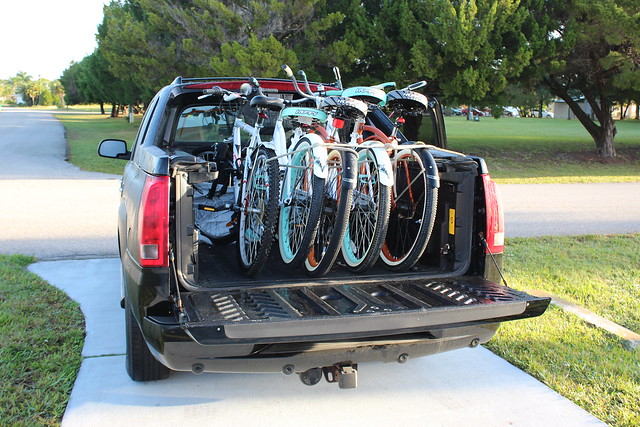 Another morning we loaded up the truck with bikes for an early morning ride along the beach while the tide was low. 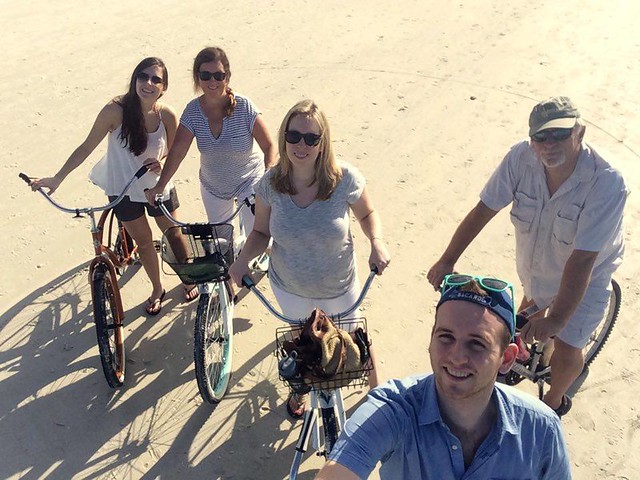 The sand is so compact at that time that you can ride along like you’re on a road. With the sun warming us up, it was a great bike ride across the beach, keeping an eye out for pretty shells. 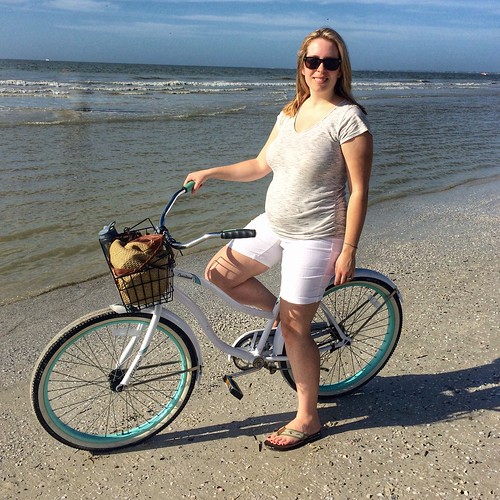 It was really nice to get out and stretch my legs, and get a little vitamin D for me and the baby. I swear my belly grew while I was down there from all the fresh air and relaxation! 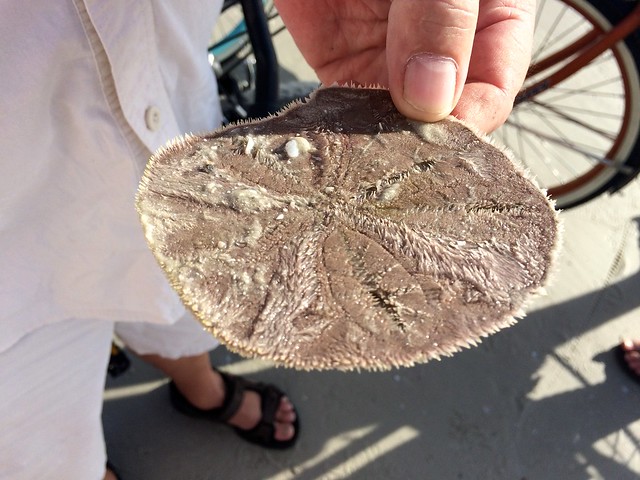 Along the way, we saw quite a few live sea creatures that had washed up on shore. My dad likes to show them to us before he lets them go back into the ocean. I’d never seen a sand dollar alive and up close like this before. All the little hairs were moving! We safely put him back into the ocean, where he can wiggle himself across the seafloor. 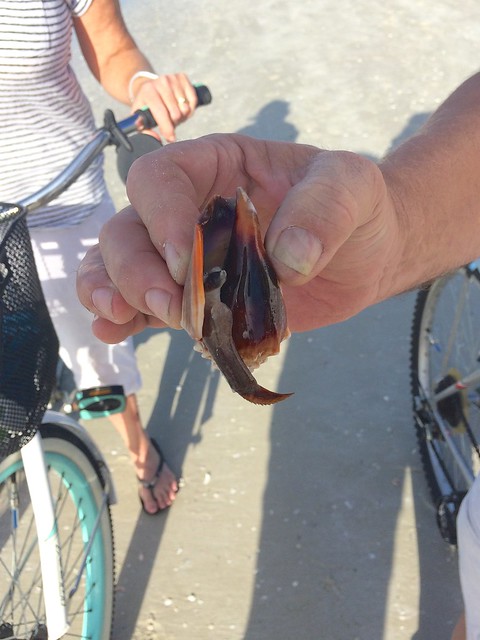 Only a minute later we biked up to this live conch…another creature I’d never seen alive before. He was quite feisty, with his beady eyes moving around and his big hook trying to stab my dad, ha! Back into the ocean for this guy too, where he isn’t going to risk getting run over by other cyclists. 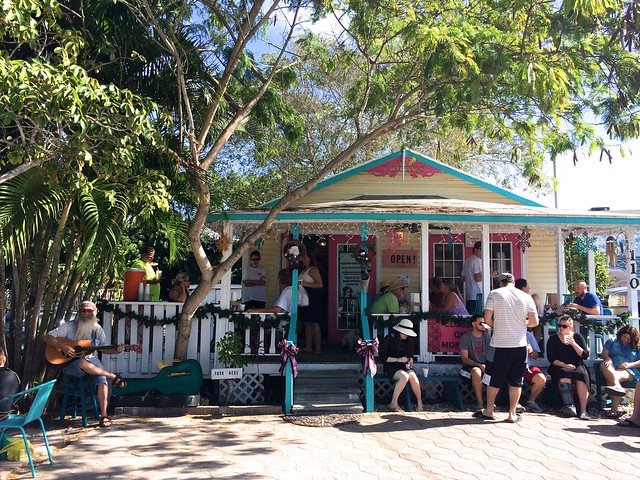 After our long bike ride, the reward was breakfast at the famous Heavenly Biscuit. Their long line ups are worth it for hot breakfast sandwiches, cinnamon buns and live music. 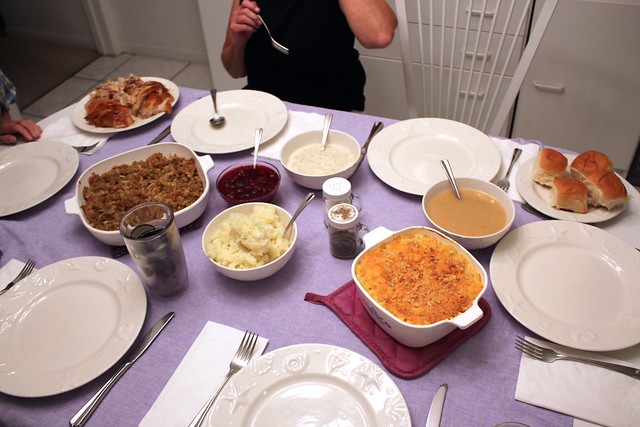 Back at home we had some pretty great meals too, including a second full Christmas turkey dinner. Usually we have turkey leftovers over the holidays while everyone is home, but we left so quickly after Christmas that we didn’t get the chance….so obviously a second dinner was needed. Ha! 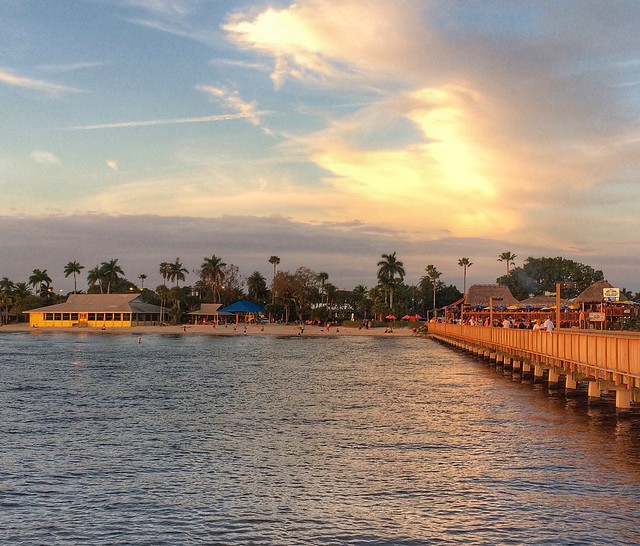 For the most part we ate our meals at home, but there were a few times that we took in the local food. Everywhere you go, there are great places right along the water. 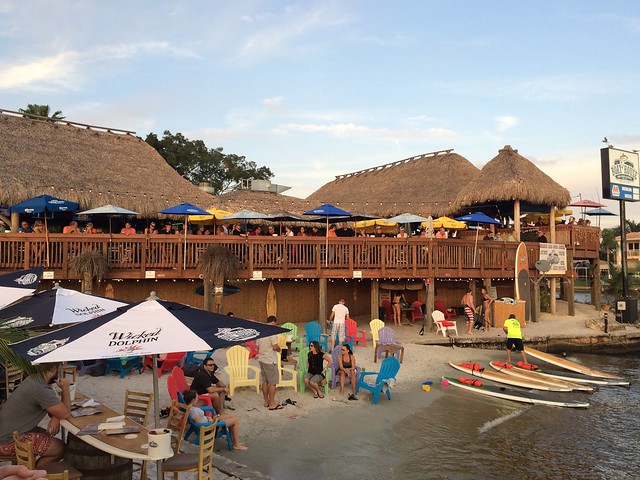 One of our favourite spots to stop by is The Boat House Tiki Bar in Cape Coral, where you can walk right along the beach or bring a paddleboard right up to the shore to grab a drink! 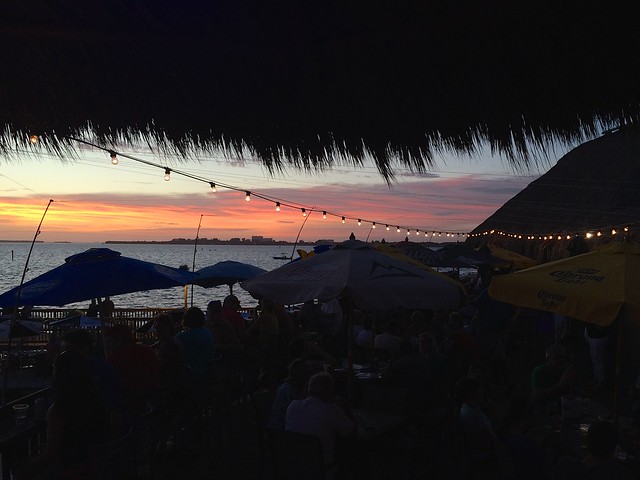 As the sun set, we got this beautiful view looking out over the Caloosahatchee River. (try saying that without getting the similar sounding Alan Jackson song in your head). 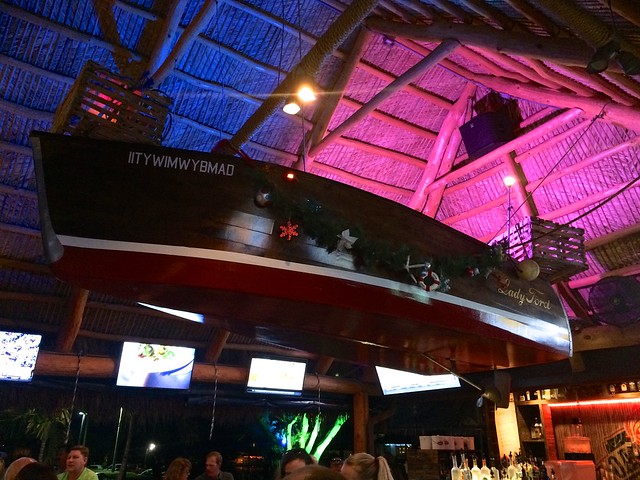 Above the bar in the restaurant there is an old wooden runabout called the Lady Ford, not unlike the Model A I saw suspended above the bar at Ford’s Garage on our trip to the Historic River District of Fort Myers in 2013.

I’ll be back with part two of our trip later this week and a tutorial on some special artwork I made for my parents’ little pink house!