Time is just whizzing by over here. Another month down and we’re that much closer to meeting our baby girl. I like having these monthly recaps to look back on. I already find myself forgetting things from the beginning, so it’s nice to be able to go back and read them again.

This week started with a bit of a scare. The news came out that two woman had been infected with the Zika Virus in the area near my parents’ house in Florida. Public Health down there were calling for pregnant women to contact their doctors about getting tested, and because I was there at the beginning of January (and was bitten by mosquitoes while kayaking) there was a very very small chance I had it. I called my midwives and they sent me to the hospital the next morning for an ultrasound to make sure that the baby’s was growing as she should be. After four hours waiting for the news at the hospital, I was relieved to find out that everything was okay. I don’t have Zika Virus and our baby is growing right on schedule. Phew! While I was there, I got to see her move around again and they confirmed again that she is indeed a girl, which was a nice perk for an otherwise stressful situation. 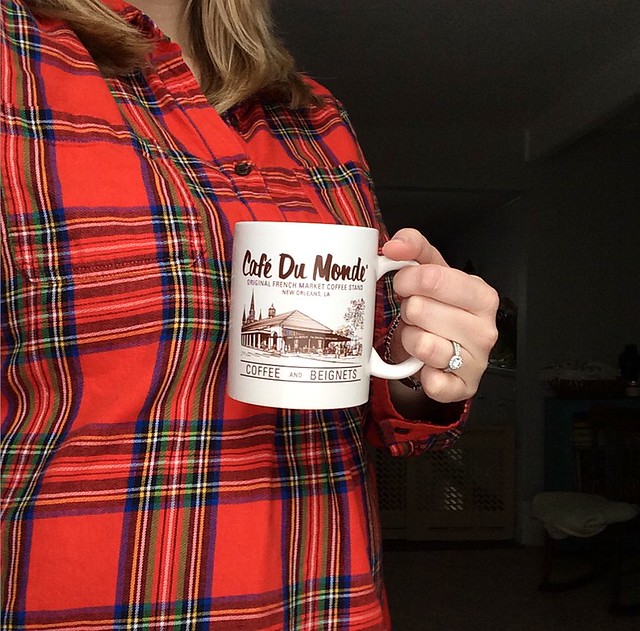 A couple of days later I started to get a wicked cold that lingered for the next two weeks. I had one back in the fall when I first found out I was pregnant, but this one was much worse. There is so little that you can take, so I mainly kept to resting and drinking lots of liquids, especially hot water with lemon, honey and ginger. 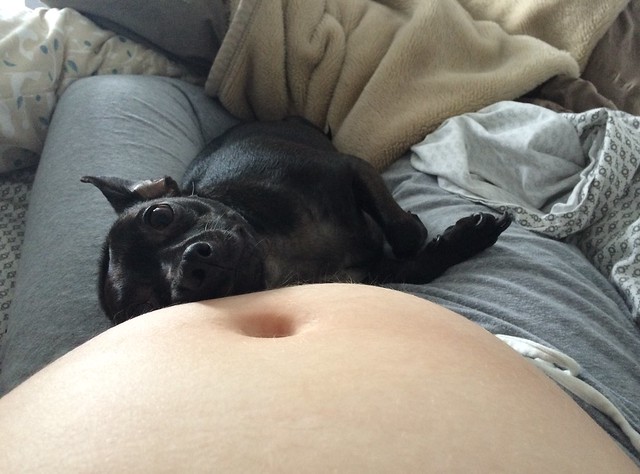 With all that downtime and laying around, I really started to pay attention to the baby moving. The little flutters and kicks have turned into whole movements when my belly looks like the ocean moving back and forth. I couldn’t help but snap this pic to send to Garrett at work on day, of Cola cuddled up with me and the baby (she is the large bump to the right). 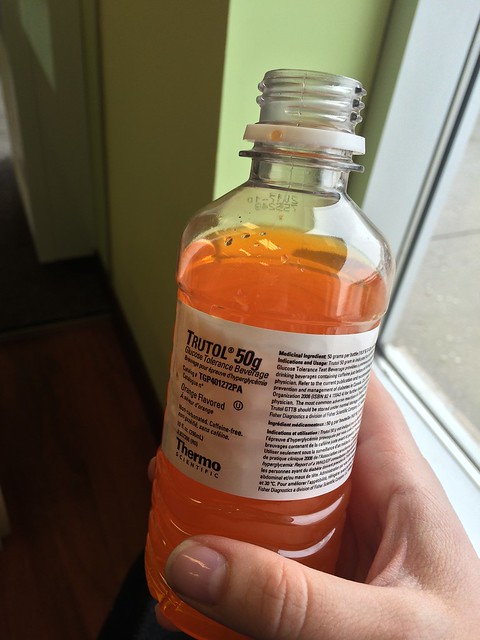 After all the blood tests and ultrasounds the week before, I wasn’t looking forward to taking the glucose test so soon. It tasted like really sweet melted orange popsicles. Thankfully everything came back okay and I don’t have to worry about gestational diabetes. Woo hoo! 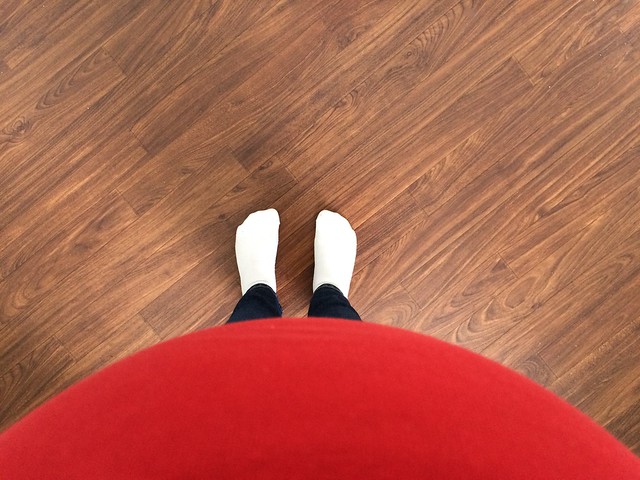 This week was my first official appointment with my midwives. I originally requested them back when I was 8 weeks but there was already a wait list for the month I’m due, so I’d started with an obstetrician at first with hopes that I could still get transferred to them if space became available. There were many reasons why Garrett and I chose to go with midwives over an obstetrician, but one of the big ones was the level of care and information that we’d receive. The first visit was almost an hour long (compared to 10 minutes with my obstetrician) and I already felt really happy with the decision to go this route. It may not be for everyone, but it feels like the best choice for our family right now. The most common assumption I get is that people think this means we’re having the baby at our house, but that isn’t the case. We’re still able to have our baby at the hospital, they can get me pain medications or an epidural if I chose and if at any time the pregnancy becomes high risk or I need a c-section, they can call in the obstetrician. They also come to our house after the delivery for the first few appointments to see how we’re doing, so I don’t need to take our newborn out to the doctor’s office. 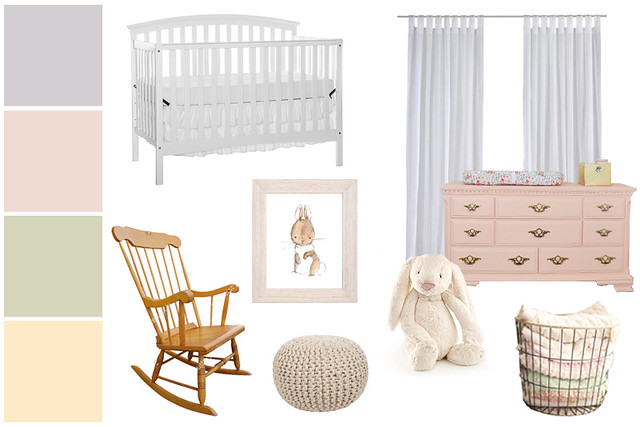 I shared a post this week about the plans we have for the nursery. It’s starting to come along and I can’t wait to eventually show the final reveal!

We took a couple trips this week to go look at things in person that we’re thinking of for the registry. I’m going to be using a wrap to carry the baby around usually, but we wanted to get a good carrier for Garrett to use as well, especially for when we go on hikes. Seeing him all strapped in (with a creepy stuffed doll from the store) it got me all gushy about how great of a father he is going to be. I can’t picture going through this adventure into parenthood with anyone else. 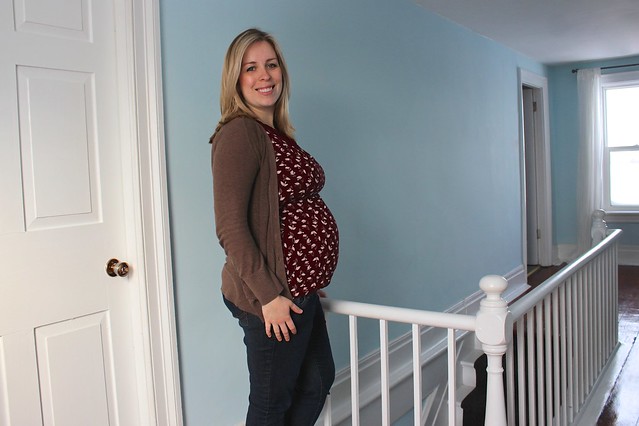 I could hardly believe that this week we’re already into the third trimester. Only three more months to go! Overall, I’ve been feeling really good and have been able to keep moving for the most part. The hardest thing is trying to bend over if I drop something on the floor. I think I’ve just about mastered the art of picking things up with my toes, ha! I haven’t gotten that pregnancy waddle yet, but I do find moving in/out of bed involves a lot more huffing and puffing. I feel really lucky that so far the pregnancy has been really good and aside from dealing with that cold a couple of weeks ago, I’m feeling good. 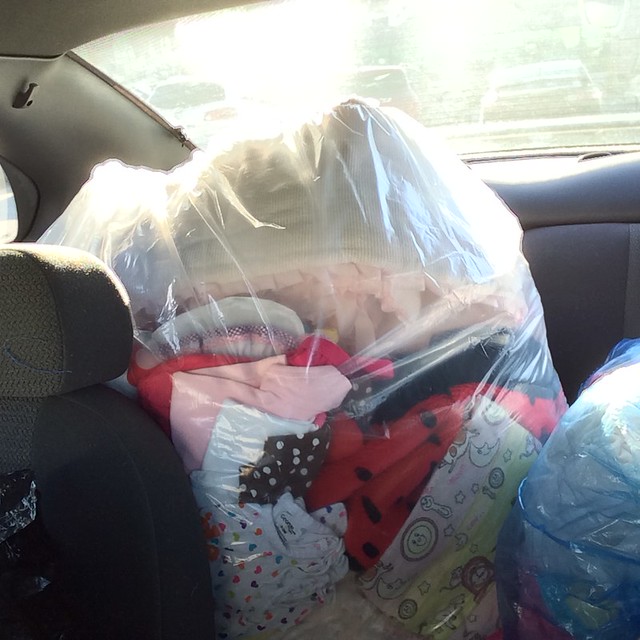 A coworker of mine is also due with a girl and found they had way too much stuff that was being given to him from family and friends. He and his wife generously offered us the extras – which came out to four HUGE garbage bags that filled up the backseat of my car. They told us to pick what we wanted out of the bags and donate the rest, but I still think we ended up keeping about 3/4 of it. There was some really cute and handy stuff in there! 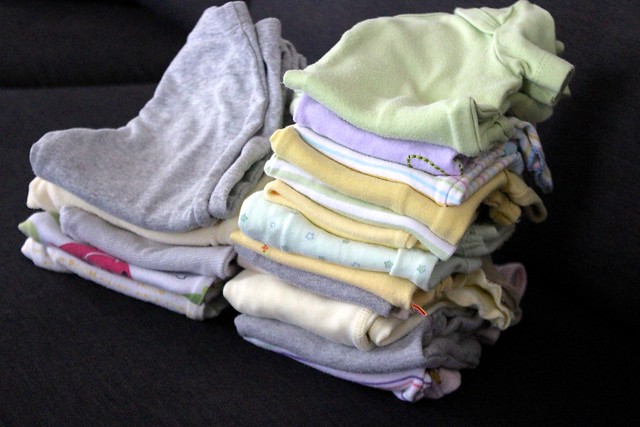 I started washing and folding everything this week to get it out of the way. I still can’t get over how cute and tiny everything is – and that we’re going to have a little person in our family soon that will actually fit into this stuff! 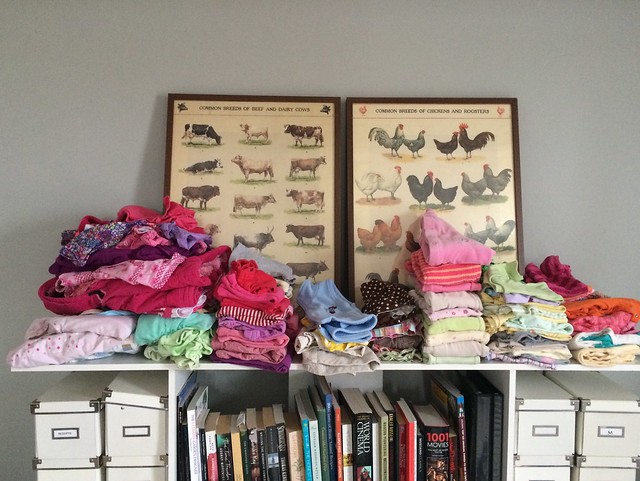 Here’s the haul so far and I’m only about halfway done washing everything. I can see we’re going to have LOTS of laundry in our future. 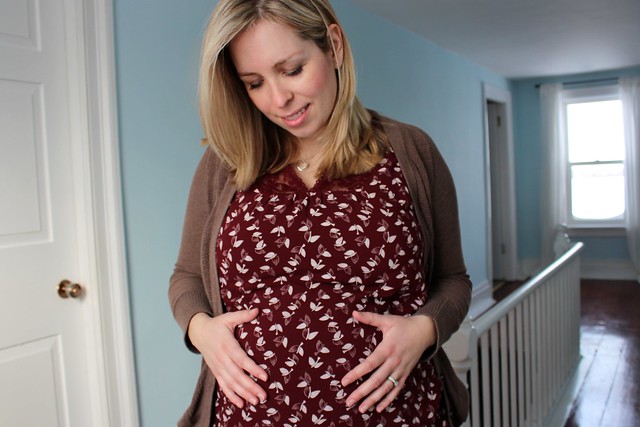 Earlier this week I shared my Pregnancy To Do List and I’m down to the last few months to get everything done. I’m going to try and scratch a few things of the list this weekend. Wish me luck!